Olivier Rousteing’s inspiration for Balmain was allegedly the blue and gold Faberge egg that Richard Burton gave to Elizabeth Taylor, which was hugely evident due to the rich jewel tones found in the heavy embellishments.

We predict Kristen Stewart, Miley Cyrus, Ashley Tisdale and other young Hollywood starlets will be rocking these glitzy designs for sure! As would we if we had the funds – definitely one of our favourites.

The autumn/winter 2012 Rick Owens collection was the binary opposite of the spring/summer outing in every way imaginable. It was a predominantly post-apocalyptic collection, with some toned down, casual looks coming out towards the end of the show. 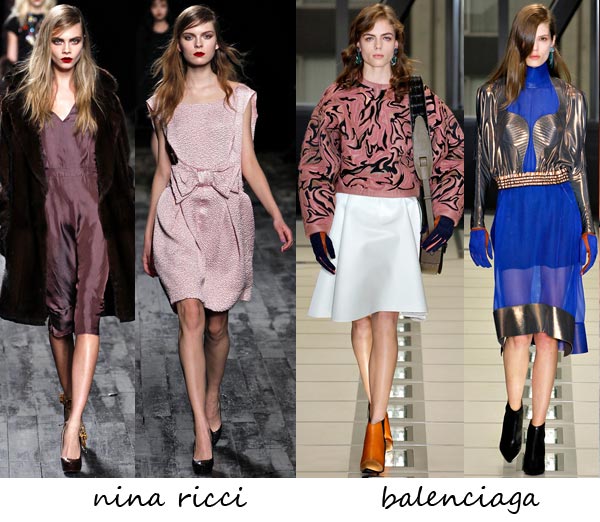 Nina Ricci’s Peter Copping’s went for a 1950s romance meets edgy sophistication theme with many uncharacteristic A-line silhouettes appearing on the catwalk. Feminine and elegant references are always abundant in Nina Ricci collections, and this one was no different.

Balenciaga’s autumn/winter 2012 outing was reportedly all about the office-wear (for an imaginary company called Balenciaga Inc), which we assume the attendees picked up on when they realised they had been invited to an office as opposed to a lavish hotel or showroom.

Although Nicolas Ghesquiere’s inspiration was workwear, he didn’t stick to boring office colours and silhouettes, oh no. He went for bright colour blocking and lots of bold, out-there cuts and designs. We loved the cheeky leather dresses, too – definitely a trend we can see translated onto the red carpet!

Come back tomorrow for our round-up of what went down on the fourth day of Paris Fashion Week!