Last Updated on 6th July 2011 Right now, after fleeing her wedding in a helicopter, Kate Moss is probably sunning herself on a beach somewhere with hubby Hince, feeding each other grapes and gulping down Moet.

Last Updated on 3rd July 2011 She may have lost the title of Most Anticipated Wedding of The Year to the other Kate, but Ms. Moss may have just won the award for the most stylish, thanks to her custom-designed Galliano dress, husband Hince’s YSL suit, and the bridesmaids’ Stella McCartney gowns.

Last Updated on 6th July 2011 After months of speculation, it was finally confirmed on Friday that Kate Moss would indeed get wed in John Galliano, and whether you’re inspired by her loyalty or not, there’s no denying she looked every inch the super bride when she married her beau this weekend.

Last Updated on 27th July 2011 So it’s official: Kate Moss has chosen a wedding dress designed by John Galliano for her big day tomorrow. Are we surprised? Not one bit.

Last Updated on 24th February 2011 When it comes to celebrity weddings, there’s only one thing on our minds, and that’s the dress. What will it be like? Who’s designing it? Although some are more secretive than others about their wedding dress – yes, Kate Middleton, we’re talking to you – there’s another Kate getting married, and she’s quite happy to tell the world the secrets of her nuptial gown.

Last Updated on 8th July 2011 They say that good genes run in the family, and as photographers snapped Kate Moss’s little sister looking every inch the beautiful bridesmaid on Kate’s wedding day, she proved they definitely do.

Last Updated on 19th October 2013 So Kate Moss’s wedding is this Friday, and though we’re dying to know what she’ll wear, her organised police cordon will make it likely we see very little of Ms. Moss – nay, Hince – on her big day.

Kate Moss’s wedding is set to take place this weekend, so she hasn’t got long to perfect those all important last minute details for the day – with food and entertainment obviously being a high priority for the supermodel.

Last Updated on 19th May 2011 A little while ago now a strange but wonderful rumour began to emerge in the fashion world that supermodel Kate Moss was making and selling her own batches of jam, but we can now reveal that in actual fact, only half of that fruity tale is true.

Last Updated on 17th May 2011 With Kate Moss reportedly set to marry boyfriend Jamie Hince in July, suspicion now turns to whether or not long-term supermodel friend Naomi Campbell will be Moss’s bridesmaid on her big day.

Last Updated on 15th March 2011 The beauty – and fashion – world has been waiting for what seems like forever for Dior to release its full length Dior Addict lipstick advert starring Kate Moss, but it looks like the wait is finally over. 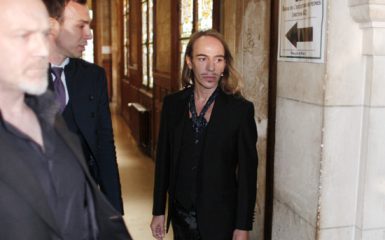 Last Updated on 9th September 2011 John Galliano has been found guilty of making racist and anti-Semitic remarks, but he won’t be facing a prison sentence, a Paris court ruled yesterday.

Victoria Beckham has given birth! It’s been the story on everyone’s minds for the past nine months, but finally, Victoria Beckham gave birth to her fourth child – and first daughter – last weekend. The name? Harper Seven. We’re sure it’ll catch on soon. Read more here!

Last Updated on 25th February 2011 Just when you thought the fashion world couldn’t get any more surprising, news flies around that Christian Dior creative director, John Galliano, has been arrested in Paris for alleged assault – yes, seriously. According to reports on international news agency ATP, via the BBC this morning, the designer was allegedly arrested in a bar after making anti-Semitic remarks and for assault on a couple. Elle UK reports that no definite details of his arrest have been confirmed as of yet, but rumours are most certainly spreading like wild fire across the board. Frankly, we don’t know when he’d have time for all this, but with his up coming Christian Dior AW11 show at Paris Fashion Week imminent, and Kate Moss’s wedding dress) to think about, we think this is one set back Galliano could have done without. We’ll update you on the matter as soon as more news arrives…

Last Updated on 19th October 2013 Emma Watson finds LA scary With the final Harry Potter film done and dusted, maybe it’s time for Hermione, sorry Emma Watson to make her move across the pond. But wait, the young starlet revealed in the August issue of Harper’s Bazaar that LA ‘scares the crap out of her’. She cites her reasons as the insane diets, botox and vanity. We aren’t one to argue with the spell binding actress, but if she wants to earn the big bucks maybe she should brave Hollywood? Read more here! Princess Charlene of Monaco weds in Armani Prive The rumour mill has been working overtime with numerous weddings this week, and we couldn’t wait to see what Princess Charlene of Monaco wore on her special day. Luckily she managed to survive the day, despite rumours of her attempts to escape, and looked beautiful in not one but two custom made dresses from Armani Prive. Read more here! Mohamed Al Fayed buys luxury e-tailer Cocosa So Mr. Al Fayed, you already own the luxury Harrods stores that sees tourists and fashionistas alike flock to the golden escalators in search of the hottest new trends. And now you’ve decided to expand your empire and buy e-tailer Cocosa. Being a man of mystery, we obviously don’t know the sum that you paid, but we’d love to know! Read more here! Pippa Middleton’s Tatler debut Ever get that feeling that your little sister is starting to copy your every move? We can imagine that’s just how the Duchess of Cambridge Kate Middleton feels about her popular sister Pippa. First she wears a gorgeous white gown to your wedding, and then come rumours that she’s also dating a Prince and now she’s appeared on the cover of Tatler a few months after you – […]

Last Updated on 2nd March 2010 Was her recent return to the runway in New York was practise for walking the aisle? It seems another model is getting wed, and this time, its Coco Rocha.