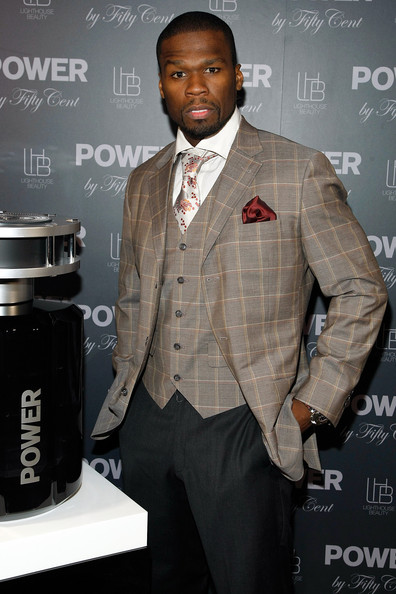 The â€˜In Da Club’ rapper has teamed up with Lighthouse Beauty to release Power by 50 Cent – a cologne he promises will make men irresistible to women.

He said: â€œWhen a woman smells the fragrance on me I wanted it to be sensual and intoxicating. I wanted the fragrance to be ultra sexy and that is why I created â€˜Power by 50 Cent’.

â€œI wanted to be able to offer some of the energy and ideas that I have. I think the fragrance embodies everything I have achieved so far.

The hip-hop star insists he was heavily involved in designing the fragrance and is proud with the results.

Fiddy explained to US TV show â€˜Extra’: â€œThe cap of the fragrance has a lot of detail on it and it is inspired by some of my favourite watches.

â€œIt was a process and of course I had great help designing it. It is totally me – the things that you see in this packaging are all me. So I am very excited to have the opportunity to send it to the public.

The 34 year old music star has urged his fans to believe in themselves and says his self-esteem was the inspiration for his new venture.

Fiddy said: â€œIt will give people an opportunity to come closer to me and I will able to show my power. It’s really about having confidence, I don’t think you have the ability to show people who you really without having confidence. Be yourself in front of people and that allows you to get into a powerful position.

The Olsen twins... not just a pretty face!