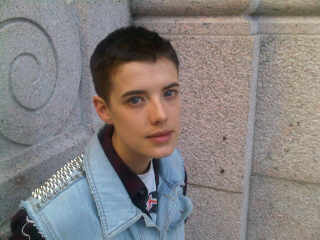 See Agyness Deyn’s new crop, find out which unlikely celeb is the latest to land a fragrance deal, and is Ugly Betty hitting the big screen?…

Not many people can go from shaggy blonde to Beatles-style black and pull it off with as much ease as Agyness Deyn, but the supermodel’s sporting a new ‘do – and it’s shorter than ever – Twitter

We know Lady Gaga likes to be a little different, but this is a step too far in even the most avant garde of shoes, non? Defacing a £3,000 Hermes Birkin with a black marker brings a tear to our eye – Purseblog

You won’t believe who’s about to launch a fragrance. We’ll give you three guesses (and you still won’t be any closer) – The Cut

Karl Lagerfeld may be keeping schtum about the 2011 Pirelli calendar he’s shooting this week, but he did let slip there’ll be three or four boys in it this time. Finally! – WWD

Fans of the fashion show fear not, the last episode may have already aired in the US, but this may not be the last you’ve seen of Ugly Betty just yet – it’s rumoured to be heading to the big screen – Elle UK

Christy Turlington: no longer a supermodel?