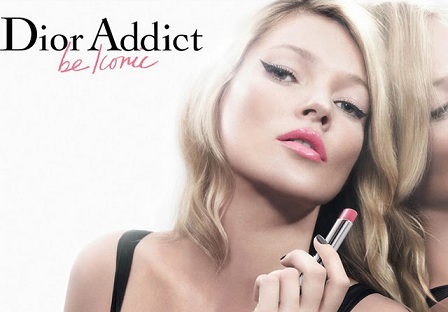 Update: The first picture’s just been released (above)!

It’s been a busy year so far for our favourite British super Kate Moss – not only has she spurred rumours recently that she’s engaged to boyfriend Jamie Hince, she’s just been confirmed as the new face behind Dior Beauty’s latest campaign.

Rumours arose late last year that she may have scored herself a scoop when Kate quite publicly applied the new Dior Addict Charmed Pink lipstick at the label’s spring/summer 2011 show in Paris, and it seems all the fuss was over something exciting indeed.

As the new face – or lips – of Dior Addict lipsticks, Kate’s perfect pout will front will star in a string of cosmetic ads set to roll out in the coming weeks, Elleuk, reveals.

And with a whole host of beauty campaigns already under her belt – Chanel, YSL and Rimmel to name a few – as well as previously fronting clothing and accessories for Dior’s fashion house, the British beauty seems the obvious candidate for such a high-end launch.

It would appear Ms. Moss isn’t shy of making a few subtle public gestures – let’s just see if wearing an engagement ring around London is also one of them!

Whet your appetite with the teaser ad here.