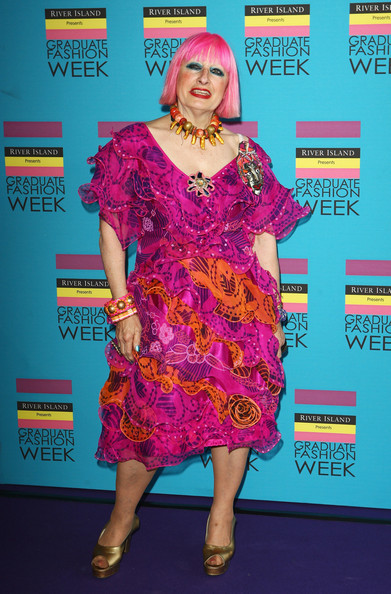 Zandra Rhodes may well be one of the only names in British fashion to be still standing since the start of her clothing label in the Sixties, and though she’s still treading fashion’s waters, it would seem the very past-time that’s paved her career is something she couldn’t care less about.

“I only shop when I’m on holiday, but never for fashion , clothes shopping doesn’t interest me in the slightest, says Zandra, who recently teamed up with Marks & Spencer to create high street collection.

But though the thought of shopping doesn’t interest this designer, it certainly does us , especially when we caught wind that she still has some 60’s samples. â€œI’ve saved one of every original Sixties designs, Zandra tells the Telegraph of her iconic pieces that saw her become one of the original innovators of individual fashion , something she’s particularly proud of.

“It’s only when people decided later in the Sixties that they wanted to be more adventurous that I became popular, she admits. â€œThe moral? Always take your own path in life, not necessarily because you want to be different, but because you should do what you want to do.

Well, Zandra, we’re very glad you did what you wanted to do, and those dresses, if you’re listening, will forever be on our wish-list.