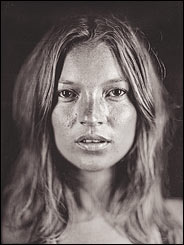 Once again Kate Moss demonstrates why she’s Britain’s top model. Very modest and true to her profession, Miss Moss has agreed to pose un-airbrushed and completely nude for the September isssue of “W” magazine. How many other supermodels would agree we wonder. Kate posed every day for 3 weeks for the compilation of this 40 page portfolio created by 17 artists and photographers.

W’s creative director, Dennis Freeman, justifies the full-frontal nudity by claiming to “give much more credit to our readers than I believe most magazines give to the readers”, and says that Moss was the obvious choice to be the subject of this project. “Kate has been our muse – ours and our photographers’ – for the simple reason that there are so many aspects to Kate’s personality,” he said. “She’s a woman, she’s a child, she’s a tomboy, she’s very sexual, she’s smart, she’s funny, she’s good, she’s bad. She’s probably one of the most beautiful, ordinary-looking women and that makes her interesting.”

(The September issue of W goes on sale on August 8)

Fashion is an expression of faith