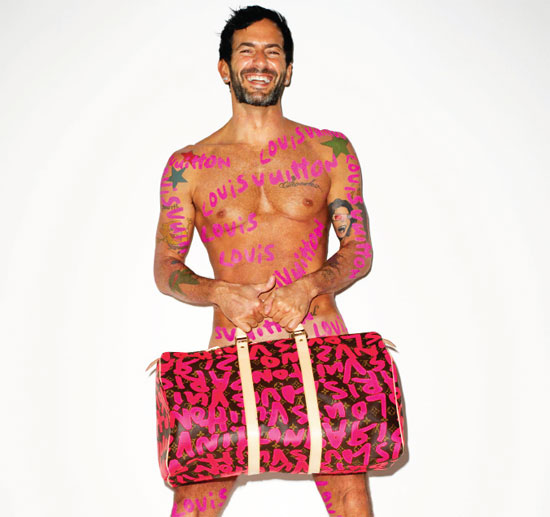 If we could have 5 personalities alive or dead round for dinner one of them would surely be Marc Jacobs. Doesn’t he seem like he’d be so much fun? Shot by Terry Richardson, this month, our favourite designer graces the cover of Harpers Bazaar, with nothing but a Louis Vuitton bag and late designer and artist Stephen Sprouse’s graffti inspired prints emblazoned over his naked body. Love it! See after the jump for some excerpts from the interview.

On the design inspiration:

â€œIt’s about taking something that’s very iconic and revered and defacing it and creating something new, something rebellious, and kind of punk,’ Jacobs explains. â€˜Cut from Marcel Duchamp to me going to see Charlotte Gainsbourg’s apartment,’ he continues. â€˜She had, by the side of her bed, a Louis Vuitton trunk that had been painted black by her father, and the Monogram was sort of peeking through.”

“God, I can’t say that,’ Jacobs says, still clearly in awe of his late friend. â€˜I mean, you could say that, but I never could.”

On his late friend:

“He had this desire to take what he saw in the streets and elevate it,’ Jacobs says of Sprouse. â€˜He was using all this stuff that was so costly, really beautiful materials, and he was doing it all so beautifully. There are so many people who try to affect a street style, but it doesn’t have the integrity. Stephen’s work was so stylistic, and it had street cred. You can’t calculate that. You have it or you don’t, and Stephen did.”

On the original idea for the Sprouse It-bag:

“They thought the bags would be for the show,’ Jacobs says, â€˜or for editorial.”

On introducing the new collection during the current economy:

“Retail therapy,’ he says, offering his leg up to the silk-screen artist. â€˜It seems to work. It’s not the longest-lasting therapy in the world, but it does its job. I’m not pretending to cure the nation’s economy, but we do what we do, and if people enjoy it, even better.”