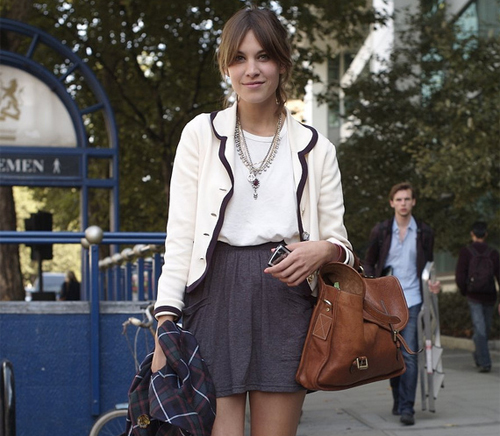 It’s hard to move these days without hearing “collaboration” or “celebrity modelling” [insert designer]”, being shouted from a penthouse rooftop. And now there is another possible collaboration on the horizon.

â€˜It’ girl of the fashion crowd, Alexa Chung has been hanging around the folks from high street chain New Look for a while now. Alexa was spotted at the British Fashion Awards sitting with the New Look crowd, and Grazia accidently spied Alexa leaving a top-secret New Look photo shoot.

If reports are correct then Alexa has been photographed by Matt Irwin and looks set to become the new face, not designer, of New Look’s Spring/Summer campaign. The collection is due to hit stores in March so you can expect the campaign images to be appearing in a magazine near you soon.

It has still not been officially confirmed by New Look or Alexa, but all the signs are there. She’s sure to sizzle and I must say it is a relief not to be writing about another celeb turned designer story. Model turned TV presenter turned fashionista turned model is weirdly a refreshing change, so thank you Alexa.

Matthew Williamson: Both model and designer for H&M

Haute Couture: The Highlights from Paris