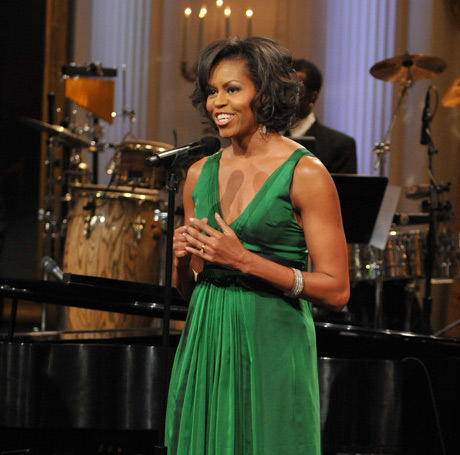 Brad Pitt has made Vanity Fair’s Best Dressed List due to his fondness for accessories.

The 45-year-old actor , who raises six children with partner Angelina Jolie was praised for his devotion to sunglasses.

Vanity Fair’s Amy Fine Collins told US TV show â€˜Today’: â€œHe has found a lot of accessories men are imitating; the hats, the aviators, the scarves. He looks good and does good.

â€œAngelina does make a good accessory for him.

While Brad received praise, there was no place on the prestigious list for Angelina. However, actresses Penelope Cruz and Anne Hathaway both made it onto the women’s list for the first time. Discussing Anne, Amy said: â€œShe is the embodiment of the glamorous nice girl. She is beautiful and fresh, clean and young, and a little bit fragile in the tradition of Audrey Hepburn.

Penelope was praised for her ability to show off her â€œbeautiful body without any â€œvulgarity. US President Barack Obama’s wife Michelle , who received the most votes the list, which has run since 1939, has ever had – and French President Nicolas Sarkozy’s wife Carla Bruni-Sarkozy were named the best dressed First Ladies.

Amy explained: â€œThey are both young, in their 40s – tall, good-looking, and the world is watching.

â€œMichelle has brought back the dress, she has turned the planet into her runway without even meaning to. She loves showing her arms and her legs, which is a bit refreshing. She goes high, she goes low. She’s very interested in American designers, but she’s not provincial. She has a good sense of colour and pattern. It’s a strong, consistent and distinctive look.

Barack also won a spot on the list, despite recently admitting his style is â€œfrumpy. Amy explained: â€œHe’s completely comfortable in his own skin. He is very much in the tradition of American classic dressers, but relaxed.

The Best Dressed Lists are voted for by over 2,000 fashion industry professionals.

Mark Ronson to partner with Gucci