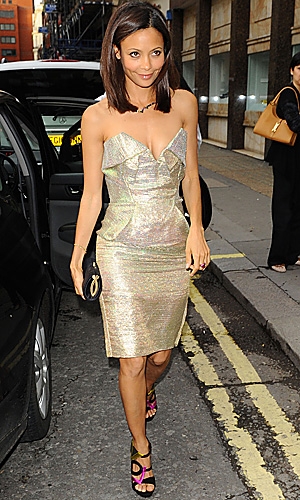 Designed by the contemporary and innovative jeweller herself, the boutique welcomed a host of individuals to peruse the space holding Azagury-Patridge’s prescious jewellery. Among those under the store’s elaborate Swarovski-encrusted ceiling was actress and Azagury-Partidge fan, Thandie Newton, who looked dazzling in a Vivienne Westwood Gold Label corset dress. Paired with black sandals and a simple clutch, we bet this shimmering number fit in perfectly with the store’s elaborate decor and its opulent jewels.

Get the Lily silk-taffeta corset dress in a bronze and violet two-tone shade: £1,788.04 from Net-a-Porter.

Get huge designer discounts at the Farfetch.com private sale!

Get the look: Neve Campbell in Moschino