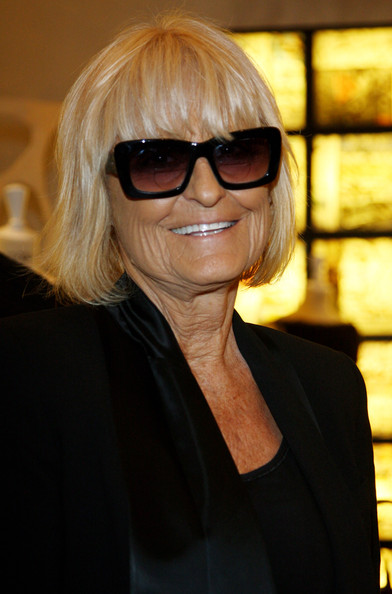 Legend isn’t a word we like to throw around lightly, but it’s the only word we see fit to describe Barbara Hulanicki – a woman who, alongside her husband, changed the face of British fashion in the Sixties. After starting her career as an illustrator, Barbara Hulanicki shot to success with Biba, the iconic fashion store, almost half a century ago and she’s since trod many waters in several different shores – fashion design in Britian, Brazil and Japan, makeup, numerous collaborations and interior design in Miami. That’s where she currently resides, with her hugely successful interiors company, and has been credited with doing as much for the architecture scene over there as she has done for fashion here. More recently, however, she’s the subject of a feature film, Beyond Biba, which charts her incredible life from her humble beginnings to her soaring success. After grabbing a copy of the film, we caught up with Barbara Hulanicki to find out more about this often over-looked but undeniably talented designer.

First of all Barbara, congratulations on Beyond Biba!

Yes, well, I had nothing to do with it – it was the lads who did it all.

How did it come about?

Well that came about because Louis’s [Price, director] mother used to work for me in the Sixties and Seventies at Biba, then she just rang me up and said could Louis come and film you in Miami while you work? So I said yes, why not? And I thought it was just an interview actually, I didn’t realise it was going to be so much fun and games.

Well it’s fantastic. We’ve seen it a couple of times now and we love it.

Oh do you? Fabulous. I try not to watch it – I get very cross with myself because we didn’t even comb our hair!

Had you ever considered the idea of doing a film before?

No, well, quite a few people came along – American’s – and I found it very difficult, I don’t think they would’ve understood London in that period, it’s a very English thing.

Were there any particularly poignant moments during the film for you?

Well I think they made it terribly poignant, you know, the way they treated it. It was very very nice, very sweet. I just did a straight interview and they intersected all the bits and music – and all that footage they found was amazing. Everything’s so much smaller than I remember.

So the film charts your life and your career – going back to the beginning how did you first get into fashion? Was it something you’d always wanted to do?

Yes, definitely, very much so. That particular period there was absolutely nothing for anybody to wear – things they’d have from before the war and all the new stuff was so horrible, so it was a kind of natural thing, the clothes, needing clothes.

You’re best known, of course, for founding the legendary Biba store with your husband. What was it like working together and being a part of – and creating – something so iconic?

It would have absolutely never happened if he hadn’t been there to do the business side and what they call marketing nowadays. It was all pretty raw, from the heart.

Did you ever expect it to become so successful?

I always wanted it to be – well, there were two stores at the time which were, I can’t remember the name of the store but it did all the labelled fruits and things at Piccadilly, and Harrods at the time was quite grand so I thought, ‘ok, we have to be like Harrods’ – not like it is today though!

Tell us about the gingham dress – it’s something that the film picks up on, but it essentially kick-started Biba, so it must have a very special place in your heart.

It did because it was an entree into the manufacturing in England, well, London, which is mostly where we made our dresses. But the word got out that there was this mad couple looking for an introduction and I know Fitz [Stephen Fitz-Simon, Barbara’s husband] was very welcome down in Fonthill Road. So of course, although we weren’t making much profit with the dress, it still meant cash flow.

You must have also made some great friends in your time there – we know the Rolling Stones and David Bowie used to frequent Biba.

Biba is well known for its colours and prints – being an illustrator can we assume that art has inspired a lot of your work?

Tremdously, yes. Very much so. Very sort of Art Nouveau stuff and Drayton and all that crowd were doing it – Pre Raphaelite stuff, very much influenced by that – and the colours. And those sort of Thirties colours, really, because there were no colours in England at the time. I mean, we used to try and go out and buy fabric on a roll and there was only sort of horrible blue, horrible red and horrible beige – and a horrible brown! There wasn’t even any black.

Do you have a favourite Biba piece?

Too many! All that leopard print stuff was quite funny.

Yes, between that we were in Brazil.

And in Japan, we believe?

Yes, definitely, we had a brand called MiniRock – a children’s brand – that was a license deal. It was very interesting because at Biba we were very protected in our own little four walls so to come out and go somewhere like Brazil, it was very raw and wild. It was quite an eye-opener, a special introduction.

What made you decide to make the move to Miami?

Oh because Ronnie Wood, one of the Rolling Stones, he said, ‘I’m doing a club, would you like to come and do it?’ So I said yes, why not?

Is that the one that was closed down for being too noisy?

Oh of course, you’re not allowed to speak! That’s right it was, eventually, but it lasted quite a while for a club. That was really great, I mean he attracted really big names – real admissions and stuff.

So you now have a very successful interior design company – how did you make that transition from being a fashion designer? Was it quite natural? Because a big part of Biba was the interior as well.

Absolutely, yes. Especially down in Miami it was pretty raw and there were a few peopole doing it and then lots of people like Chris Blackwell coming in and buying armloads of properties along the beach and it sort of started with one thing and then we moved on to another and another and another. It just evolved.

Was it hard to begin with to get involved in that?

Exasperating! Especially here – this and the Bahamas, it’s very tough work. Not the drawing, getting things executed!

There’s a lot of that happening here – lots of heart attacks!

Do you now have a preference between fashion and interiors or do they both go hand in hand for you?

It’s really nice to switch from one to the other, because one is sort of very small and fast – you do your drawing and it’s out, then you follow it through, one small object. But with a building, oh my god, it goes on for years sometimes. People will say to you, ‘I want to do this project, it’s going to be eight months,’ and I kind of say, ‘really? Eight months?’ You know, this is going to take two or three years.

Oh yes, a lot, and I’m working with a big company – I can’t say who it is but it’s going to be a lot of frocks!

Exciting! We’re actually wearing your red leopard print dress for Topshop at the moment in your honour.

Do you ever see yourself revisiting the fashion market fully, or do you like to keep it to the odd project?

At the moment it’s kind of projects but things move in mysterious ways.

Yeah, it should be great, and I hope to be doing shoes as well. I find it important to work with people who do good prices.

Well that’s what Biba was all about originally wasn’t it?

Yes, and it has to stay in that sort of groove, you know, and not move out of it. Because the minute the design thing comes in they want to do expensive clothes and put the prices up.

So having been credited with changing the shape of British fashion in Sixties and Seventies, what do you make of the fashion scene today? Do you think it’s changed much over the years?

Oh, yes, I mean it’s developed like mad. Remember it’s all those people who were coming into the shop who are actually running all these companies, so it’s very interesting. I mean they’ve developed – it’s really the best high street in the world, I think, because it’s not copies – this is original stuff for the mass market.

Fashion seems to have a great way of embracing young talent as well now, doesn’t it?

Isn’t it wonderful? Yes, and there’s so much of it, too.

Do you have any favourite designers?

Well I think I’m always open to new people, you know, especially all the college shows – I’ve been going to those and there’s some really interesting people. There’s an awful lot, I hope there’s jobs for them all.

Sadly we’ve come to the end of our questions but we’d like to ask you one more thing, and it’s fashion advice for our readers – if you could pick one item that every woman absolutely must own in her wardrobe, what would it be?

A jacket, I think. A really good one, a good shape with good shoulders and lovely skinny arms.

Beyond Biba is available from amazon.co.uk and from the film’s website at www.beyondbibamovie.com, where you can also find posters signed by Barbara Hulanicki.

Lady Gaga is not launching a fragrance