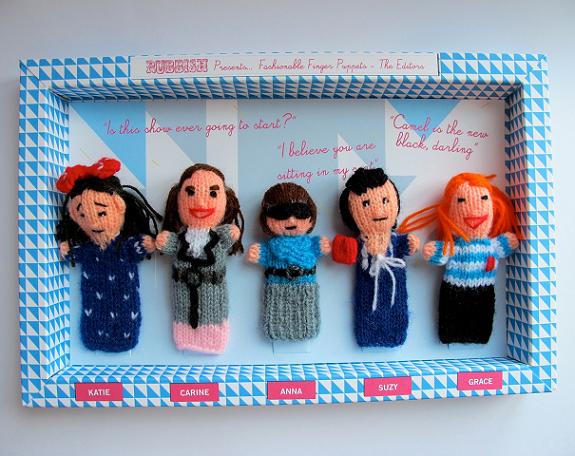 We’ve almost hit the big 5, 000 followers on Twitter, so to celebrate reaching somewhat of a social media milestone, we’re holding a little giveaway especially for our faithful followers – we’ve got our hands on a box of RUBBISH’s fashion editor finger puppets worth £49.99!

Anyone who remember’s RUBBISH’s first round of finger puppets last year will know how sought-after – and totally hilarious – their knitted fashion figures are, and this special editors edition is no different.

Katie Grand, Carine Roitfeld, Anna Wintour, Suzy Menkes and Grace Coddington – aka the famous five (and we say that in the editorial sense, not Enid Blyton, FYI) – have all been forever immortalised in novelty knit form just in time for Christmas in the second series of limited edition finger fashionistas. And with only 200 available from specially selected retailers and online at www.rubbishmagshop.com, they’re sure as hell one covetable collectors item.

So we guess you’ll be pleased to hear we’ve got a box to give away, right?

Once we’ve hit the big 5,000 followers on Twitter, we’ll be giving away a box of Rubbish’s fashion editor finger puppets to one lucky person – all you have to do is follow us and RUBBISH on Twitter and retweet “@MyFashionLife are giving away a box of @RUBBISH_INK fashion editor finger puppets – follow and RT to win!” We’ll then select a winner from our followers who have retweeted the message.

Get tweeting folks – if flicking Anna Wintour off your little finger doesn’t put a smile on your face, we don’t have high hopes for a happy Christmas.