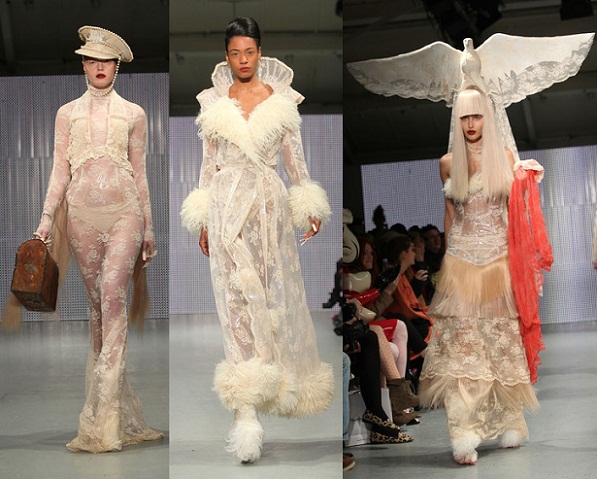 Thoughts: Nudity, blood, PVC and gas masks – what a show – once again Charlie Le Mindu produced a collection so full of extravagance and sheer shock that it’s destined to be as talked about as his exhibitionist SS11 production. Piercing electronica set the scene for the confronting entrance of the first model – naked, dripping in blood red paint and with a VIOLENCE head piece. The crowd’s attention was grabbed, held and not released until the squealing of pigs indicated the show’s end.

A slaughter house seemed the venue, but alleged inspiration was a Berlin wartime brothel where upon the French Haute Coiffeur was apparently exploring the extremes of femininity and sodomy. Gaga wigs, eagle headdresses and cigarette nail addendums were theatrically striking and like last season’s show nudity was the norm – conveyed unaccompanied or through transparent PVC – but this time is was more expected so was given a vexing edge: gore.

Decadent lace, elegant pearls and fine feathers embellished dresses, jackets and ankle cuffs and played the stark antithesis to spray-painted mohicans and disturbing gas masks with goatie-like hair extensions.  The collection was as much an art exhibition as a fashion collection where numerous conflicting parodies were out to play – heaven and hell, pleasure and pain, love and torture and the delicate versus the horrific.