BACKSTAGE: We took a peek backstage during the final moments of preparation before the Inbar Spector show, and saw the hair and make-up team hard at work putting the finishing touches on their models. We also had a nose around, and among the discarded pieces of braided and back-combed hair pieces, found some of the most beautiful, colourful, sparkly head pieces that we were more than intrigued by. We knew we were going to be in for a treat when we spied them and excitedly tweeted our followers a picture.

After the show, we returned backstage to have a chat with the very talented Lan Nguyen, who was in charge of the make-up! Lan has been doing the makeup for The Body Shop for the past two seasons now, and with over thirty shows to lend her talent to, we were thrilled she even had a spare minute to talk to us about the make-up look she and her team created for the Inbar Spector show.

“It was very important that we had the right amount of tone of pink in there,” Lan said about the make-up.

“Its all about the Victorian era, having that pale porcelain skin, the doll look around the eyes. Even the eyelashes, we had to think about what mascara we used; we couldn’t use full volume because otherwise it would look too glamorous. So we had to define and lengthen and create more spiky eyelashes as opposed to thick voluptuous ones. Everything was there, but it wasn’t. They had to be princess-like and young and also kind of vulnerable at the same time.”

Check out our gallery below for more of our backstage snaps, plus pictures of Lan and Inbar!

What: Fairytale and escapism to the max! Inbar described her collection as a combination of “fairytale, manga, dreams and circus clowns”… and a dreamy collection it was indeed! The clown inspiration was very noticeable in some of the pieces, although we’re glad she opted for a softer, more playful colour palette than that usually associated with a clown’s attire. There were sparkles, ruffles (said to represent the utopia of her collection), lace, and plenty of nude tones and soft hues.

Highlights: The two finale dresses were a definite highlight, and not just for us either – the entire room cheered and applauded when they made their way down the runway. The Lara Jensen headpieces get another mention, as we really were blown away not only by the pieces themselves, but the impact they had on the outfits and the show as a whole.

Lowlights: Struggling here, so let’s just go with not having enough fabulous occasions to wear the collection to. How’s that?

Overall: Israeli-born Inbar Spector definitely achieved her goal of transporting her audience into a fantasy land far, far away. We hear on the grapevine that Inbar will be branching out into the field of accessories soon, which opens more doors to a world of new possibilities. We know she won’t hold back either, and predict her new designs will be just as magical as her clothes!

AND FINALLY: The video below from The Body Shop is a must-see, as it features more backstage snippets from some of the shows at the wonderful Vauxhall Fashion Scout, as well as another interview with Lan Nguyen, who not only explains the key make-up trends that are set to take the world by storm next season, but shows you how they’re done too!

Whites with a spring summer 2012 slant! 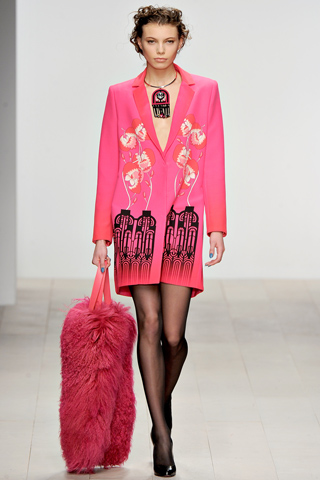