Given how Katy Perry enjoys dressing lately, we think she’ll be very pleased with the Stella McCartney collection, as most of it comes in her current favourite hue! Check Karlie Kloss out looking all demure in that dress – that girl can pull of everything! Tailored coats were in abundance in Stella’s latest collection, as well as oversized jackets, pleated trousers, and a hint of sportswear towards the end (which was probably a nod to the Olympics uniforms she created for the British teams).

Chloé’s Clare Waight Keller’s presented a much more minimalist, grown up and elegant collection compared to the See by Chloé sister line which showcased its autumn/winter 2012 collection a few days ago. It was quite a casual outing, which was apparently inspired by English sportswear, but with a hint of glam courtesy of the French way of dressing. 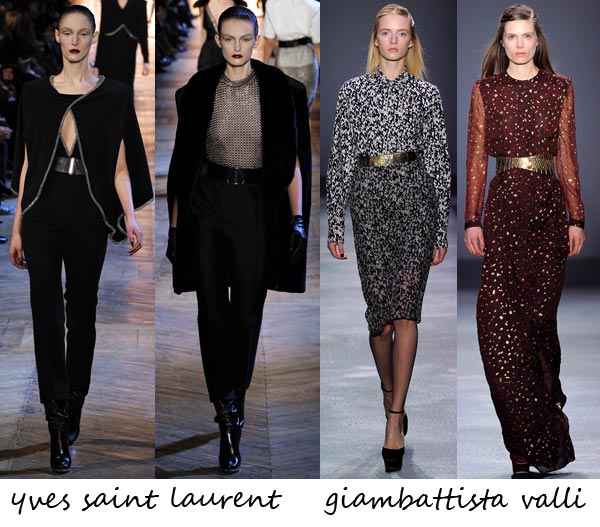 Ever since we heard Stefano Pilati would be leaving Yves Saint Laurent, we’ve been imagining how he wanted to say goodbye to the fashion house, but didn’t really think he would go out with a dark, fetish-inspired bang. Still, it was definitely memorable, and a very fitting, almost morbid way to leave. There was a lot of vampire chic in his autumn/winter 2012 collection, as there was plenty of leather, rubber and gothic make-up to boot.

King of couture Giambattista Valli proved that he isn’t just a one trick pony, as he is also capable of presenting a very high standard ready-to-wear collection too. Now that he has a couture collection to play with and go wild on, it was nice to see him reign some of his designs in, as he presented a more refined, edgy collection this time around. Our favourite pieces included cropped trousers and oversized sweaters, with monochrome being a key colour trend.

Return of the Culotte!

Top 5 Stylish Mums: The mumsy wardobes to be reckoned with!