Three Kate Middleton looks for the price of one!

As part of her role as a Team GB and Paralympics GB 2012 ambassador, the Duchess of Cambridge headed to the Olympic Park in Stratford yesterday morning in order to meet the Team GB Women’s hockey team.

Kate was also keen to have a go herself, so she swapped the blazer and heels she arrived with for a hoodie and some trainers and cracked on. She definitely looked like she was having a whale of a time – and as she was the captain of the 1st 11 at Marlborough College, we imagine she knew a thing or two about what she was doing, too!

She looked poised and perfect throughout the game, and her hair was miraculously still in tact – as bouncy and voluminous as ever!

The Duchess initially arrived in coral skinny jeans, black heels and a navy blazer, which she later swapped for her sporty gear. Another wardrobe change later, and she was ready to head to Dulwich Picture Gallery in south London with her father-in-law Prince Charles, wearing a beautiful pleated grey dress from Irish designer Orla Kiely’s autumn/winter 2011 collection.

Although we can’t argue that Kate looked gorgeous in her smart attire, we loved seeing her dressed down in jeans and a hoodie – and she still managed to look like a Princess! 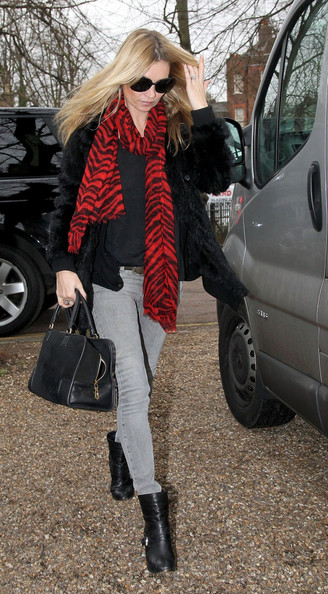 Kate Moss will appear in Olympic episode of Ab Fab