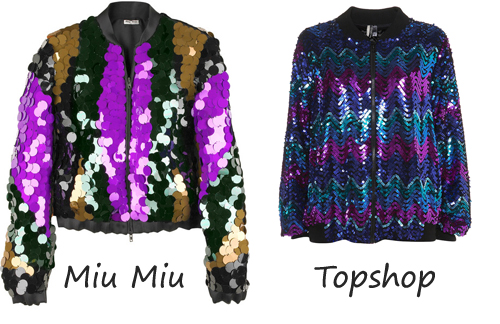 At the risk of sounding like a character from Scooby Doo… yikes! Would you look at this sparkly little number from Topshop? It seems our favourite high street store has taken some tips from none other than Ms Miuccia Prada to create this glistening creation. Last year, we saw Miu Miu’s sequinned bomber hit the fashion world in all it’s shiny glory, and now it looks like it’s the high street’s turn…

As a natural Magpie, I admit to having the tendency to wander towards all things shiny. In fact, I would go as far as saying I love sequins, but I think I’ve reached my limit here. Could it be sequin overkill after the party season? Perhaps. Or maybe it’s the vibrant colours that are the problem and I’m just not brave enough. I’d like to think that this jacket might work if it was showered in black;  however I still get that niggling feeling that this is in fact, a bomber jacket. I just don’t think I’m ever going to come round to the idea.

If however you’re a fan of the sequin/colour/bomber combo, nip to Topshop and nab this quick, because at £85, it’s a snip of Miu Miu’s which would set you back a cool £1,605.

Victoria Beckham gets militant at LAX