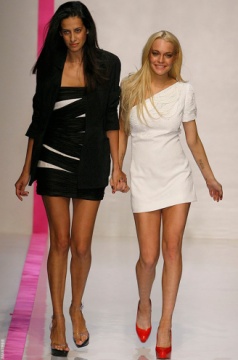 Lindsay Lohan debuted her first collection for Ungaro this weekend in Paris.

Since being named as artistic director of the French fashion house, Lindsay’s faced flack for her involvement with the brand, with many vowing to skip their Paris Fashion Week show altogether.

Brought in to inject a youthful vibe to the label, Lindsay’s collection was a clash of hot pinks, 80’s inspired party dresses and hearts stamped on everything, according to reports at Elle UK, and it seems the fash-pack weren’t all that impressed with the collection, nor the 45-minute late start. Oh dear.

In fairness to the once-actress-turned-socialite, she did only have one month to put the collection together with head designer Estrella Archs, and stepping out to take her bow in a one-shouldered white dress from the collection, she apparently looked rather nervous.

Let’s face it, she never was going to get a rapturous response from the unforgiving fashion crowd, was she? However this pans out, Lindsay’s certainly caused a stir around Emanuel Ungaro, which was what the label wanted first and foremost.

Perhaps Lindsay, who has her own line of less-than-lovely leggings, should ditch playing designer and go back to her, er, acting career?

Claudia Schiffer steps off the catwalk