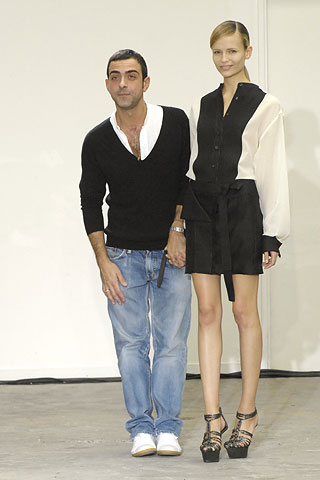 Not that he ever went anywhere, but British born designer Antonio Berardi is having somewhat of a fashion moment.

Already popular among the A-listers , Gwenyth Paltro famously wore his lace-panelled dress on her Iron Man comeback tour, and Victoria Beckham was the first to attempt his heel-less shoes , Berardi’s designs are becoming more and more popular with the stars as we approach red carpet season.

â€œGwyneth asked if she could keep the [lace-panel] dress because it was such a good look for her, said Berardi. â€œIt is amazing to think that they can wear whatever they want. They have access to whichever designer, but they choose you.

Yes, Berardi, they choose you for your curve-enhancing bodycon dresses. Both Jessica Alba and Penelope Cruz have called in such pieces , 10 and eight such pieces retrospectively, no less , for the upcoming award ceremonies.

â€œI’ve always done the body-con look. I like shape. I like hips. I do like the hourglass, and I like that sense of a woman. It’s what I’ve grown up with. It’s my Sicilian heritage, the designer, who’s previously ranted about women with a lack of curves, told the Timesonline.

And with that we await his AW10 offerings, where we expect oodles more embellished bodycon bits.

Julia Roberts on becoming the face of LancÃ´me

One to watch: Stephane Rolland