In case you missed it (er, where have you been?), Prince William and Kate Middleton got married on Friday in what was, quite possibly, the grandest ceremony we’ve ever witnessed.

Pulling out all the pageantry and pearls, the Duke and Duchess of Cambridge, as they’re now known, celebrated the most-talked about event of the century in true regal style – but they weren’t the only ones who made the effort.

Guests – including the royal family and those sitting high enough up on the social ladder to be invited – put on a pretty spectacular performance in the sartorial department with enough fascinators to form a faction, and naturally, our eyes were cast firmly over the fashion spotlight. 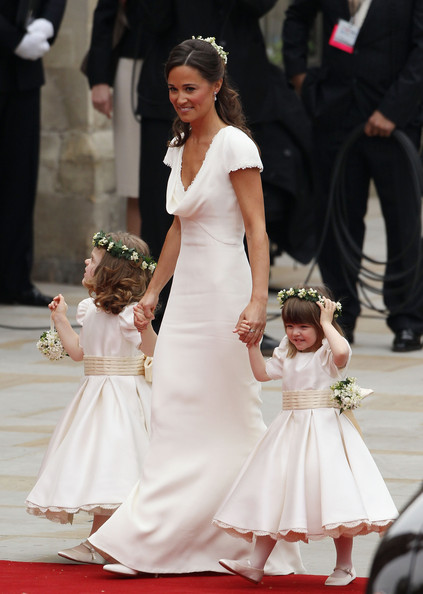 Maid of honour and sister of Kate, Pippa wore a white silk Alexander McQueen dress designed by Sarah Burton. With a scooped cowl neck and delicate lace trim – not to mention an incredibly pert bum – she was the envy of pretty much every woman in the world (except, perhaps, for Kate). 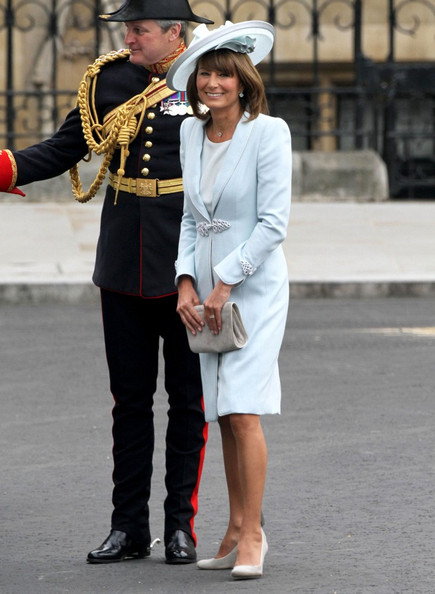 Kate’s mum opted for a powder blue dress coat by Catherine Walker, which sat wonderfully against her skin and matching hat – a proud mother and a proud choice. 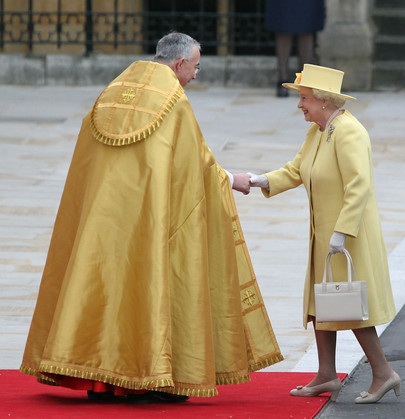 Dressed head to toe in lemon, Queen Elizabeth chose a matching dress and overcoat by Angela Kelly. Who knew the Queen was so on-trend? 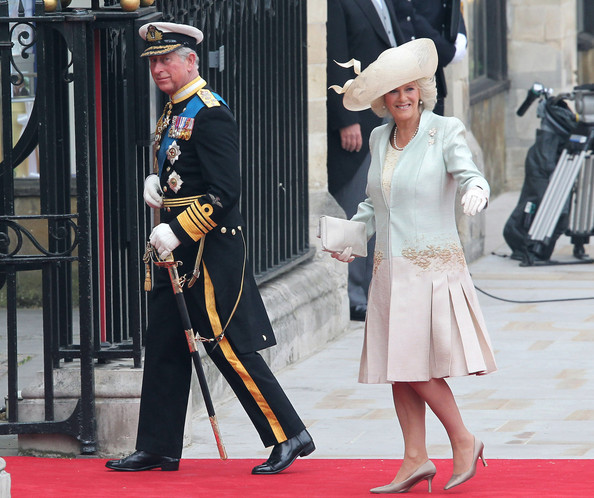 Camilla Parker Bowles, Duchess of Cornwall, chose a pale blue and nude gradient look from Anna Valentine, the designer who created her 2005 wedding dress when she married Prince Charles. 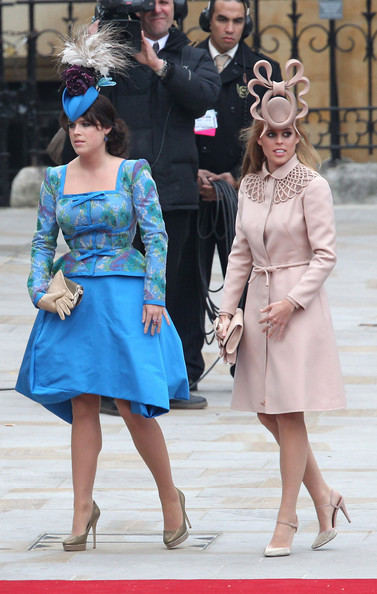 Princess Eugenie opted for a blue Vivienne Westwood dress which unfortunately did little to flatter her figure whilst her sister opted for a more pared-down approach in a nude Valentino Couture dress and coat, which she accessorised with a pair of antlers and/or crab by Philip Treacy. At least they had each other for company. 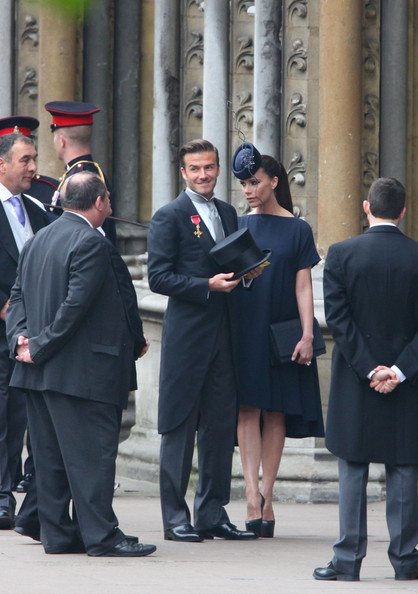 Wearing one of her own dresses from her AW11 collection, Victoria Beckham did well to hide her baby bump in a modified navy gown with a flowing pleated hem, accessorised, as always, with sky-high Christian Louboutin platforms and a hat by Philip Treacy. 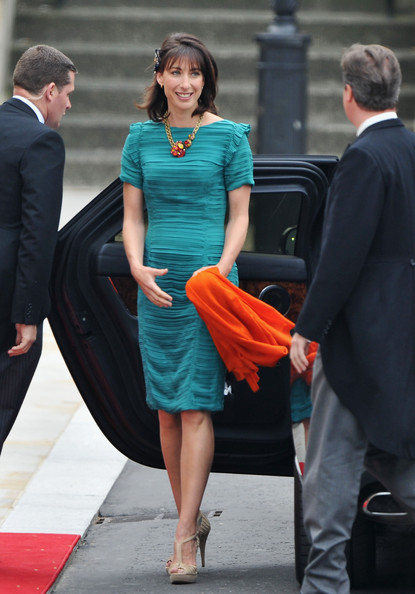 Sam Cam chose a teal ruched dress by Burberry for the royal wedding, accessorised with Erdem jewels and a contrasting orange cardigan. She looks incredibly chic – and totally on trend – in her colour blocking outfit, but we wonder if she looks a little under dressed without a hat. 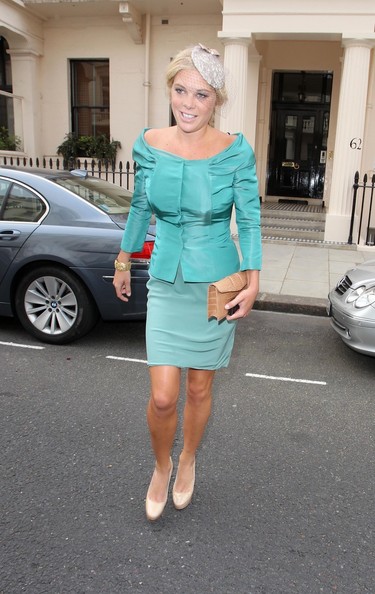 Favouring an Italian label over British, Prince Harry’s ex wore a turquoise skirt suit by Alberta Ferretti and hat by Victoria Grant. Unfortunately, it makes her look a little busty and we doubt it was enough to catch Prince Harry’s attention next to Pippa. 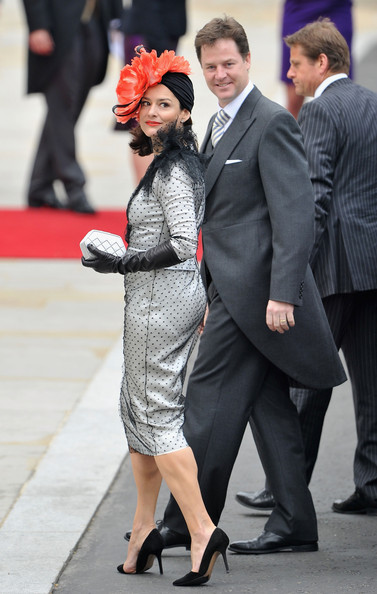 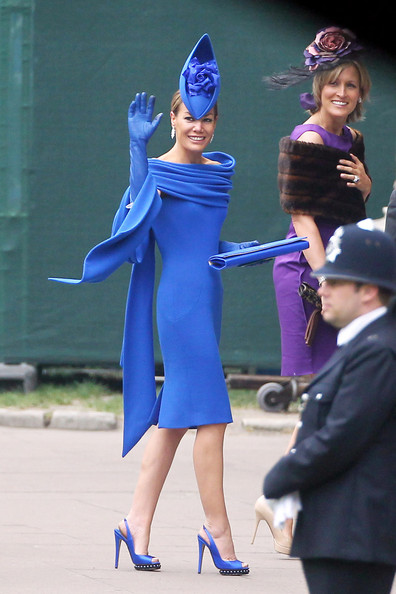 We’ve heard the term ‘something blue’, but Tara Palmer-Tomkinson took the phrase to a whole new level in an all-blue ensemble on Friday. Wearing an electric dress by Deborah Milner, a statement hat by Philip Treacy and studded shoes by Nicholas Kirkwood – as well as a clutch, elbow-length gloves and wrap – her matchy-matchy look was a massive no-no.

Kate's dress from all angles