Ok, we admit it – we’re officially obsessed with Snow White and the Huntsman, given the fact that this is the third post involving the film’s main stars today.

Both Snow White Kristen Stewart and Evil Queen Charlize Theron decided to opt for gothic glamour at the London premiere of the film in Leicester Square last night, we guess to coincide with the darker take
on the classic fairytale.

We were expecting Kristen to rock up in Balenciaga – something of the mini-dress variety – but boy were we wrong! Instead, she went for a full-length, sheer, lacy Marchesa number from the autumn/winter 2012 collection and kept her make-up relatively neutral.

Charlize Theron also went for the black and gothic look, as she donned a sheer Christian Dior Couture (natch) gown, and wore her hair in a sleek, un-distracting up-do. She also went for some heavier eye make-up, but we think she can get away with it more thanks to her blonde hair and simpler dress.

Both ladies smashed it on the red carpet, but who do you think was the fairest of them all? (Sorry, couldn’t help ourselves!) 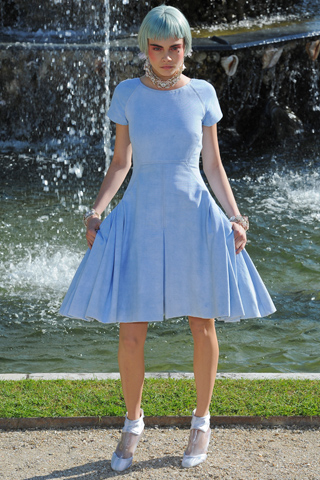 Chanel Cruise 2012-13: The collection and the guests