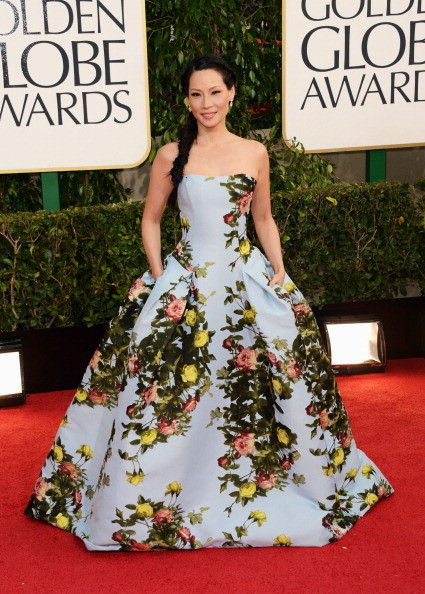 Yes, we know we’ve been waxing lyrical non-stop about how Awards Season dresses have taken over our fash brains, but we just can’t stop admiring the killer looks Hollywood’s leading ladies pulled out for last week’s red carpet.

Lucy Liu was a certified sartorial star at the 2013 Golden Globes, making an appearance in a beyond-beautiful Carolina Herrera Pre-Fall 2013 ball gown, emblazoned with most surprisingly spring-fresh floral print imaginable!

Undoubtedly, this show-stopping gown turned several heads on the night, considering most looks were traditionally red-carpet worthy. But it was Lucy’s overspill of nonchalance that won us over and landed her with the Best Dressed title; the relaxed fishtail braid, minimal jewellery and a fresh-faced approach to makeup spelt princess perfection with an unrefined edge.

Do you agree with our style verdict? Loving Lucy’s look?