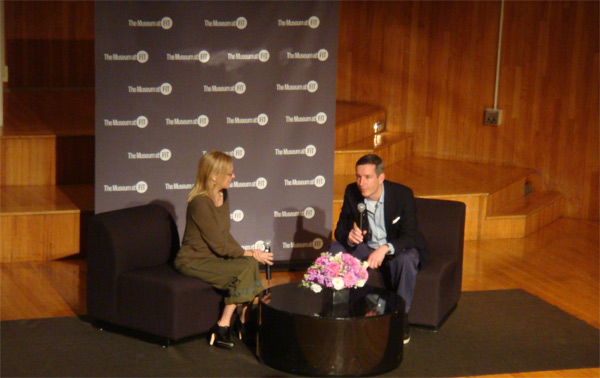 Following his acceptance of the 2009 Couture Council Award for Artistry of Fashion, Dries Van Noten joined Valerie Steele, director of The Museum at FIT, for an intimate question-and-answer session with students at the Fashion Institute of Technology. I have never seen an interview with the Belgian designer so I eagerly made my way to FIT’s Kate Murphy Amphitheater on the morning of New York Fashion Week’s first official day.

The designer was impeccably dressed in, what I can only assume is one of his own designs as he revealed during the interview that while he loves to “see, shop, and travel,” he doesn’t wear any other designer’s clothing. Not because he doesn’t want to, but because he’s simply lazy and nothing can beat the convenience of going into his warehouse and picking something out — jealous!

Besides his shopping habits, the influence of color and fabric was discussed at length with Steele calling Van Noten “the greatest colorist since Saint Laurent.” She also noted that she rarely wears color, but that when she does it’s very often Van Noten. The Belgium designer truly is a master when it comes to matching colors with the appropriate fabrics and textures. When asked for his color inspiration he said that he finds it anywhere and everywhere — from paintings and flowers, to cars and fluttering curtains, adding that “color is a way of translating emotion; fabric is the way to translate my dreams.”

Van Noten is one of the few designers, at his level of success, who is entirely self-financed a position that gives him the kind of creative freedom most can only dream of. He doesn’t have to launch shoe lines, perfumes, and all kinds of other accessories because of corporate pressures, but rather those expansions happen organically and if he decides that he wants to do an all-black collection devoid of any color or florals, well, he can do that too.

Amidst all of the interesting remarks the cool and composed designer made, what struck me most is when he discussed the fact that he is based out of Antwerp. He spoke about how he leads a quiet life and that Belgium gives him “distance from the fashion circus” allowing for what he called “a healthy perspective” that contributes to his creative process.

Van Noten has a wonderfully original point of view when it comes to fashion and it was great to see that after all his success he is still very humble and willing to share his insights with the next generation of designers (I only wish his accent wasn’t, at times, so difficult to decipher!).