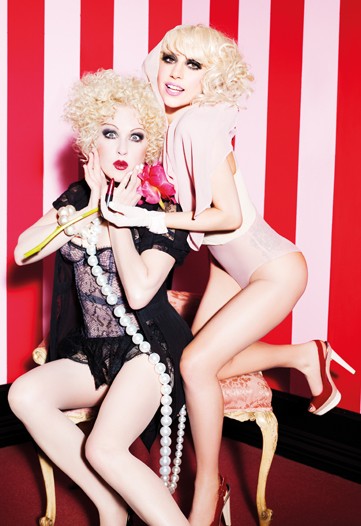 Back when we spilled the beans about Lady Gaga and Cyndi Lauper’s lipstick line for MAC, little did we know in a few month’s time Lady G would be tuning into her inner Sex Ed teacher.

The pair, who are quite the sartorial match-made in heaven, have both created a lipstick for beauty brand MAC to help raise awareness of AIDS and promote safe sex.

In fact, she thinks condoms should be a staple accessory in a woman’s handbag. â€œBuying condoms is seen as a male accessory, Gaga tells WWD. â€œWe were joking that we wish the lipstick had on the side, â€˜Where’s my best friend, the condom? Come out with me tonight.’ The lipstick should be a reminder to practice safe sex on their own, as opposed to hoping that the guy they went out with has it in a drawer next to his bed.

The campaign, shot by Ellen Von Unworth, is set to launch in April, and according to Gaga, we’re in for a treat. â€œCyndi looks sexy, I look sexy â€” I think it’s a more feminine side of me.”

â€œThat’s what this is about. You can be strong about your sexuality and be a smart woman who wears lipstick and high heels and looks pretty.

Both lipsticks are available in the US now for $14 (proceeds go directly to the MAC AIDS Fund), but the rest of the world will have to wait until March to line their lips with the stuff.