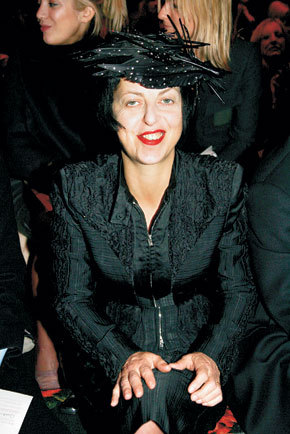 Well, isn’t September proving quite the month for good reads? As well as Grace Coddington’s autobiography, make sure you pick up the memoirs of Detmar Blow, Isabella Blow‘s husband, who’s written a book on his life with the fashion icon.

Set to be a blow by blow account of their life together (that clever pun is the autobiography’s title, by the way), Detmar details the path of Isabella’s life, the various tragedies she suffered – including the death of her two-year-old brother who died in her care – her magnetism as an international fashion figure and style icon, and her deep desperation to kill herself.

He also recalls the first time they met at a mutual friends wedding, and how after just a few minutes she already had hold of his heart.

“I couldn’t take my eyes off her. After the service, I waited for an opportunity to speak to her – and we immediately connected,” Detmar writes in the book, according to Vogue UK. “Despite the brevity of our meeting, I knew I had fallen in love with her, and sat with her after dinner. We were kindred spirits and I ended up telling her about my father’s suicide. It was, I admit, an unusual chat-up line.”

A beautiful story with an incredibly sad ending, we suggest you snap up a copy as soon as Blow by Blow is released on September 2nd.

Your best looks from V Festival