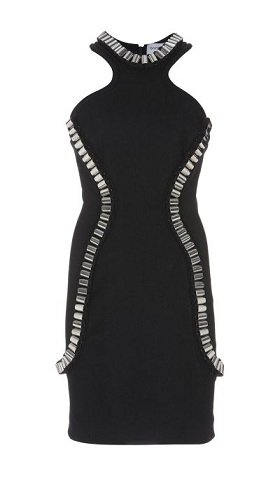 A few years ago on the X Factor, Cheryl Cole wore a very unusual dress with metal-pipe detailing by new designer David Koma and it made front page news. A few weeks later Beyonce wore his dress to collect a few MTV awards.

Since then, he’s become one of London’s hottest tickets, and now, luckily for us, we can have a piece of that attention-grabbing style via his collaboration with Topshop.

Amongst four others, Koma has cleverly recreated the dress that first shot him to fame but in a far more wearable way – a simple black bodycon halter dress with statement metal piping.

It’s not cheap – at £350 you’ll have to be feeling flush – but every girl needs a staple sexy LBD in their wardrobe. Another hotly-anticipated collaboration from Topshop, it’s bound to sell-out fast – go now before it’s too late!

Lady Gaga's new perfume will contain her own blood