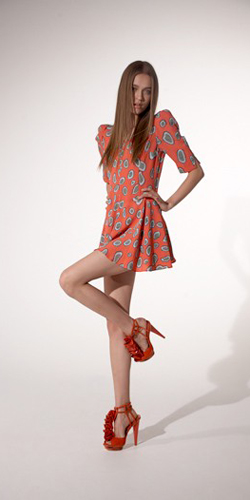 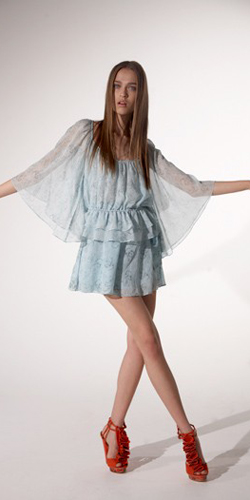 Topshop and Biba have been compared over and over again. Both huge successes, both aimed at young women, synonymous with British fashion and both broke/break the mould of high street fashion.

It therefore seems only fitting that Biba founder/designer Barbara Hulanicki should collaborate with the high street brand. We can now reveal the first pictures of the new collection, and if they are anything to go by, this is one collection worthy of another stiletto stampede.

With a good girl/bad girl theme we can expect girly shades and fabrics but with an edge of toughness. So expect to be pulling out your gladiator platforms and shrunken leather jackets again.

This isn’t the first time our favourite high street chain have collaborated with a 60s design legend. Topshop hooked up with Ossie Clarke’s ex wife and designer Celia Birtwell who created numerous pieces in her signature prints. Hulanicki is also no stranger to collaborations with a great homeware line at Habitat and wallpaper at Graham & Brown.

We are expecting great things from this collaboration, after all both know how to create design success. And in full support Barbara Hulanicki was spotted at the Topshop Unique show, on the comparison drawn between her brand and Topshop she replied: â€œOh no, Topshop is much wilder. Has she forgotten those leopard print catsuits she designed? It doesn’t come much wilder than that.

We mentioned that the line would be exclusive to Topshop and would be launched in the New York store. Hopefully it’s an international/nationwide line but we will just have to wait and see. So start training now ladies, if you want your piece of Barbara Hulanicki you’re going to have to be quick.