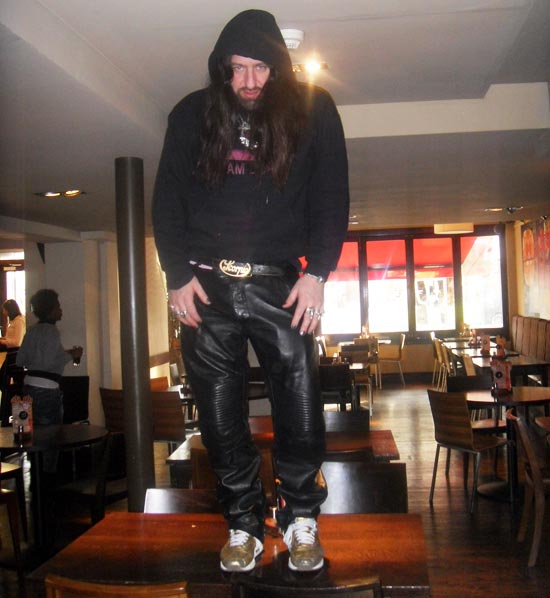 I’m seated at the entrance of Nandos in Shepherds Bush. This is fashion stylist, Johnny Blue Eyes’ favourite restaurant. It’s also his local. Born and bred in Shepherd’s Bush, Johnny has lived in the area all his life, although he does flit between his home town and New York. As he approaches the door I recognise him instantly. His long thick dark hair is a major giveaway. He’s wearing a hoodie paired with leather trousers, accessorized with a big buckled belt and carrying a large oversized bag. Johnny greets me so warmly that I feel immediately comfortable in his presence. At 41, he describes himself as an artist first and foremost, however his love for dressing up has played a major part in his path down the road of fashion.

Johnny is perhaps better known as a stylist, in particular for his work with artists such as Beth Ditto (whom he considers to be a close friend), Ana Matronic from the Scissor Sisters, the Klaxxons and many more famous faces. At the moment, the self-confessed grafter (Johnny wakes up at 7am every morning and hits the sack at 2am) has made a move to the world of design through his label House of Blue Eyes.

“The House of Blue Eyes is essentially a movement”, says Johnny passionately. “It’s very inspired by Warhol and the energy of The Factory of New York in the late sixties, early seventies with me as the sort of Warhol-esque character with all these designers and artists and performers and models who are part of that house. The fashion collection is a big room in the house but it is essentially bringing together fashion, art and music…. The House of Blue Eyes is a house of love, and hope and change.”

If you saw the show or read our review you’ll also know it was a tad controversial. Titled, “Don’t be afraid of the darkness within” and inspired by both horror films and rock n roll, the show featured a topless Alice Dellal, alongside models that rebelled against fashions view of what constitutes being beautiful.

Keen not to be misunderstood, Johnny is quick to point out that the collection was about more than the exposure of flesh, “the message I’m trying to get across with the show and with what I’m doing is that we’re all beautiful, we’re all special, we all come in different shapes and sizes, different colours, different sexualities, different social statuses” he declares.

Moving away from fashion, I tried to get a sense of who Johnny was. If you frequented the NY club scene in the early nineties, chances are you’d have bumped into Johnny at some point…probably in Club USA. His big heart is apparent throughout the interview. He loves, love. 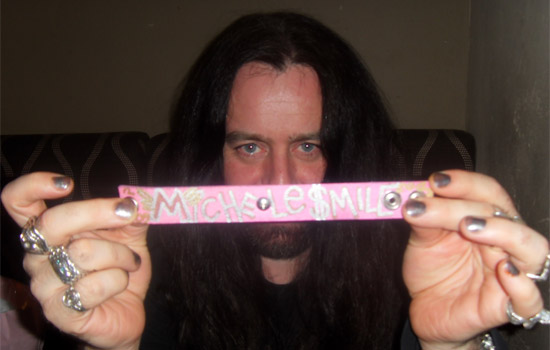 Of course I had to ask his thoughts on Beth Ditto’s cover for Love magazine. “Gorgeous! Sensational. When I go down Shepherds Bush on the bus I’m like, there’s my girl. There’s my Beth. I love her, she’s an absolute sweetheart. As you see her is how she is”.

Johnny is the first to admit that he can be a bit of a mystery, “I think a lot of people have found it hard to wrap their heads around what I am and who I am and what I’m doing. He poses a question to me, “Am I what you thought I’d be?”

Honestly, I had made no judgement on Johnny’s character prior to meeting him. Now as I sit and write this interview I’ve realised why it’s taken me a while to get past my first draft. I’m such a perfectionist and I think a part of me was concerned my description of Johnny wouldn’t do him justice. But anyway here goes. Johnny Blue Eyes is energetic, enigmatic, slightly eccentric, full of life, enamoured with love, appreciative of women, obsessed with Nando’s and depending on your philosophy on life and human nature, he can be described as incredibly naive. For me, he was refreshingly optimistic.

At this point, I’ll leave you with my favourite quote from the interview. It was the moment at which I felt I truly got an honest insight into what Johnny is about.

“I’ll tell you what, I’ve been through hell and high water and survived, I lost people along the way from drugs, murder, cancer, aids and thank god I’m alive and I’ve gone through some wicked parts in my life honey – abuse, drugs, fucked-upness, nervous break downs. I’ve had all that fucking shit…you can put that on the website whatever. You know what I’m here, drug free and well. I’m making my art which is the thing that keeps me going more than anything, the lifeblood of me. Honey, I want to bring love in to the world with my art and with my fashion and with my films. And it will either be or it won’t be but I’ll tell you what no one’s fucking stopping me honey. I’m on my way now, and people will either like it or don’t like it. I don’t give a shit. Do you know what, I’m saying that in the nicest possible way. I do want people to care. I do want people to get into it, but not everyone is going to understand me and not everyone is going to want to get on my train of love.”

The House of Blue Eyes is made up of: