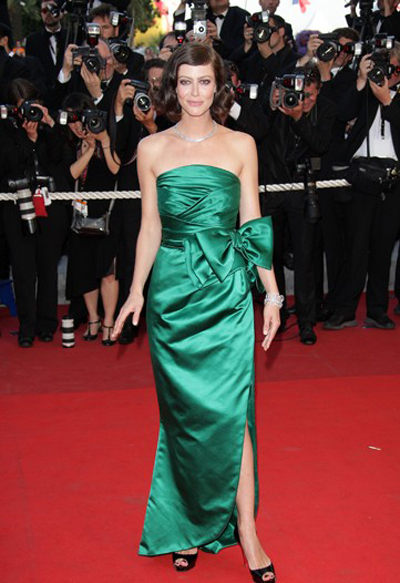 Coco Chanel is having quite a year. With two biopics out this year, starring two of the most beautiful women playing her; Audrey Tautou and Anna Mouglalis. She would no doubt be rather flattered.

Audrey Tautou’s film titled â€˜Coco avant Chanel’ follows the life of the queen of fashion, while Anna Mouglalis plays Coco in a film about her affair with Russian composer Igor Stravinsky, called â€˜Coco Chanel & Igor Stravinsky’. So for fashion lovers, this summer will be a dream come true.

â€˜Coco Chanel & Igor Stravkinsky’ closed Cannes film festival, and so of course Mouglalis had to make sure that she wore an outfit to remember. But never fear, Karl Lagerfeld was on hand.

Lagerfeld created the emerald gown in homage to Ava Gardner who Lagerfeld feels Mouglalis resembles. It is a striking colour and has a very silver screen siren feel to it. The giant bow is fun yet elegant, the hem line is a little strange, but overall it is a beautiful gown. Mouglalis has in effect been in training for Chanel for eight years, since she became a muse for the fashion house, she told WWD:

“I got to spend so much time in (Chanel’s) apartment, I took siestas on her canape – filled her ashtray.”

It must be very exciting to get the opportunity to play Coco Chanel, for she truly was an inspirational and complex woman. But with the two films on the horizon, who do you think will play Coco the best?