If you’ve ever ventured down past a post to read a bit about who I am as a writer, you would know that I possess an intriguing alter-ego in that I’m a biomedical researcher by day and well, an art aficionado by night (and day)!

As expected, a good chunk of my day is spent poring through scientific literature, writing manuscripts or tending to research participants. The other chunk feeds that right-brain lust for fashion, art and anything where a sizeable dose of subjectivity can be thrown at it. As expected, over the course of my workday, the odd chance of coming across anything remotely fashion-related amid the scientific jargon is rare. Browsing fashion blogs and reading the latest findings in the Journal of Neuroscience are tasks that are far removed from one another—except for today!

Truth be told, the world of biomedicine is not void of aesthetic sensibilities towards beauty. For instance, botox is one scientific design where medicine and aesthetics meet symbiotically to render subjective beauty onto those who relent to the knife. So, in essence, the blurb I stumbled upon today on the bizarre association between bow ties and health didn’t surprise me in the slightest.

Interestingly, neckwear is emerging as a slightly more direct manifestation of fashion in the drab, white coated world of medicine. Thanks to a certain cadre of doctors from two Cleveland, Ohio hospitals, the American medical profession is taking note of how the fashion sensibilities of doctors could very well play an integral role in efficacious health. To add further legitimacy to the debate, these fashionable claims are championed by recent scientific studies that found that almost half of the long ties worn by medical health personnel harbor bacteria that cause germs! The notion to the tie-germ connection is that as doctors frequent bedside upon bedside shining lights into eyes and ears or listening for heart/lungs, their ties inherently will loll about, touching the patient, the bed railings and pretty much anything in its path. As the doctor makes his rounds, a steady stockpile of germs accumulates on the tie, forming a respository for pathogens that could potentially cause harm to a patients’ health. Quite alarming, no?

Well Dr. Kent Smith, the vice dean at Case Western Reserve University Medical School in Cleveland, Ohio has offered an alternative: ditch dangling neckties for the more suave bow tie. Smith’s suggestion comes from his longstanding partiality towards bow ties, envisioning the distinctive neckwear as a “nice, break-the-ice kind of thing.” For Dr. Walter Chwals, a pediatric surgeon at the Rainbow Babies and Childrens Hospital that’s also in Ohio, he dons bow ties to honor his late father, but he is equally cognizant of the health benefits it affords both his patients and himself.

Unfortunately, the aesthetic leanings of these two doctors hasn’t permeated to the rest of their colleagues. At the hospital where I ply my trade, very rarely do I see attendings, residents, or med students sport a bow tie–it remains the customary long, drab and often oversized tie. Across the pond in the United Kingdom, the landscape is far more progressive. Apparently, doctors in the UK are now obligated to dress bare from the neck down.I’m not sure if there’s any truth to this (UK readers, confirm for me please), but white doctor’s coats, watches, and long neckties are no longer welcome in the world of medicine in the United Kingdom.

So what’s my weigh in on the issue. Personally, I’ve been partial to bow ties way before this hoopla broke out. Even though I don’t engage in direct patient contact, I still opt for a bow tie over a long necktie. Then again, if it has to be a necktie, the small girth of a skinny tie would work well to evade those pesky pathogens. For the resolute doctors resistant to change, there’s a remedial device called The Tie Thing that (i) helps curb your tie’s wayward behavior and (ii) trumps tie pins, tie bars, tie clips, tie chains and any other contraption designed to keep ties in check. I won’t get too prolix about the workings of The Tie Thing, but let’s just say the nifty strip of fabric slides into the loop label at the back of your tie and is then buttoned to the shirt. For $3.75, The Tie Thing is worth a shot. If not, then in the name of the Hippocratic Oath get thee a bow tie

p.s. this post is exclusively not for doctors; there’s a certain dandyism to bow ties that every man should tap into and not just Dr. Kent Smith!

The Clothes Show comes to London 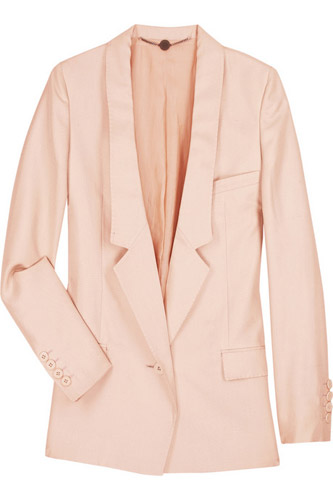