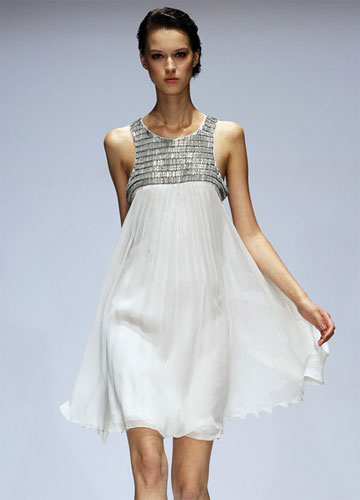 The British designer – who sold her label last December but bought it back in April – is thrilled with the progress the brand has made since she came back.

She said: “I am delighted to return to the London Fashion Week schedule in September, especially during such an important season.

Through buying back my label, I have confirmed my commitment to the continued development of Amanda Wakeley and showing again in London is a key step forward in that process.”

This is the first time the 46-year-old designer – whose Hollywood clients include Scarlett Johansson, Dame Helen Mirren, Demi Moore and Kate Beckinsale – has been in control of her label in over a decade.

She will join a host of coveted fashion houses, including Burberry, Matthew Williamson, Jonathan Saunders and Pringle, who have decided to show in London this September to mark the Fashion Week’s 25th anniversary.

Harold Tillman, chairman of the British Fashion Council is hopeful Britain’s autumn fashion celebration will be the “best yet”.

He said: “September’s London Fashion Week is shaping up to be our biggest and best yet. The timing couldn’t be more perfect for Amanda Wakeley to be back at the helm of her company and on the official catwalk schedule in time for our 25 year celebrations.”
London Fashion Week will take place from September 18-22 at Somerset House.

READ:   Dakota Fanning is InStyle UK’s December cover star!
This page may contain affiliate links. We may receive a small commission when you click an affiliate link and make a purchase. This helps keep My Fashion Life running so we can provide you with high-quality content regularly. Thank you for your support!