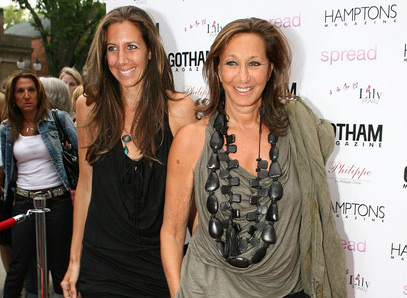 Donna Karan designed her daughter a short wedding dress to show off her legs.

The US fashion designer was only too happy to make a gown when Gabby announced her plans to wed several years ago, but was determined Gabby should make the most of her assets.

Donna explained: â€œGabby and Gian Paolo married on a beach at Parrot Cay on the Turks and Caicos Islands, where we have a family home. It’s one of our favourite places in the world.

â€œTheir wedding was magical. Everyone wore white. For Gabby, I designed a very short dress to show off her mile-long legs and gave it a long tulle skirt to float around her while she walked.

Donna, 60, started selling clothes at 14 and went on to study at New York’s Parsons The New School For Design.

She admits the industry has changed lots since she became involved, but is glad it is constantly evolving.

She told Britain’s Hello! magazine: â€œIt’s become much more individual. Long, short, pants, soft, tailored , it all looks right, depending on the woman, her body and her personal style. There’s no one way to go anymore. That’s a very positive thing.