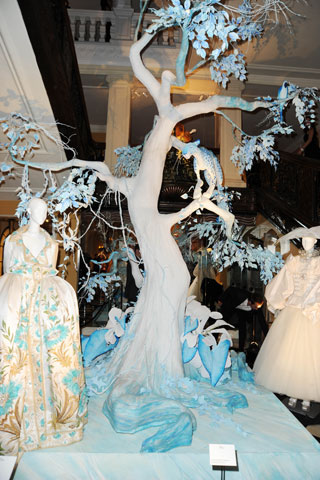 Remember us revealing a while back that Dior was designing a Christmas tree for Claridge’s? To mark the beginning of the festive season, last night the trendy tree had its grand unveiling , and to a rather fashionable crowd, might we add.

Standing alongside an exhibition of vintage Dior gowns and a chorus of carol singers, the John Galliano-designed Christmas tree shone in all its glistening glory in the London hotel’s foyer.

We weren’t there, but thanks to the aforementioned British designer, we got a little feel for it. â€œDior party in a private room and there is more dead animals in here than people, he tweeted. Well, it is Dior.

Meanwhile at the unveiling, milliner Stephen Jones told Vogue UK what he’d like for Christmas: â€œSome time off and a Dior couture dress, he said, speaking of the many that were on show.

It's over for Lacroix