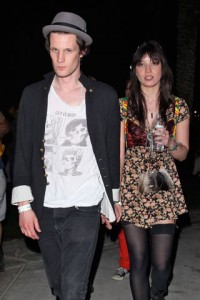 Daisy and the Doctor
Gorgeous young girl about town Daisy Lowe has is all doesn’t she? Well now she’s got a time-travelling lord to add to her list of things we wish we had. Yes Daisy’s dating the new Doctor Who, Matt Smith. According to Vogue UK they were spotted holding hands at a recent festival. Next they’ll be jetting off in a blue telephone box together…read more here.

Terry Richardson shoots Tamara Mellon Naked
The usually polished and presentable Tamara Mellon has revealed a whole different side this week as Terry Richardson’s shots of her for Interview magazine were released. Let’s just say if it weren’t for a strategically placed cat there wouldn’t be possible to reveal much more of Ms. Mellon. Read more here.

Burberry Launches Makeup
Our favourite Brit mega-brand is going to launch a beauty line, which means we can now match our foundation to our trench. The 96 piece collection is set to launch this summer and promises to include a dreamy array of blushes, pressed powders, eyeshadows, mascaras – the lot. We’re even looking forward to seeing the packaging! Read more here.

Fashion’s Night Out
Not only is it set to be the biggest event in the year’s style calendar, Fashion’s Night Out is now set to be New York City’s biggest public fashion show in history. With a role-call of the biggest catwalk names including Karlie Kloss, Chanel Iman and Daria Werbowy the night is set to be an ultimate fashion extravaganza. With a portion of the proceeds going to the New York Aids fund it sounds like the perfect combination of style and charity. Read more here.

Cindy Crawford does Jewellery
90s supermodel Cindy Crawford’s bout to put her name back on the fashion map: she’s teaming up with JC Penney to create a jewellery collection called ‘One Kiss’, and it’s set to launch at the end of the month. We’re looking forward to checking out the collection when it launches at the end of the month. Read more here.

READ:   Daisy Lowe poses for Jean Paul Gaultier’s Diet Coke Tattoo bottle
This page may contain affiliate links. We may receive a small commission when you click an affiliate link and make a purchase. This helps keep My Fashion Life running so we can provide you with high-quality content regularly. Thank you for your support!