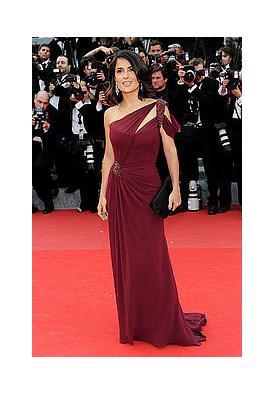 It was back in January that we heard the first whispers of a Gucci Couture line, but since we’ve seen no concrete evidence that such a thing exists – until this morning, that is. We’ve spied the first ever Gucci Couture gown on none other than Salma Hayek.

And boy did she choose good. Well, what else do you expect when you’re married to Francois-Henri Pinault, CEO of PPR who owns Gucci, other than the very best selection of gowns at your diposal?

Proving that Frida Giannini’s couture collection is well and truly in the works, Salma wore a wine-coloured floorlength silk gown with crystal embellishments – the very first from the Gucci Premiere line – to last night’s premiere of Robin Hood at Cannes Film Festival, Fashionologie reveals; and from what we can see, it looks lovely.

It may be the first, but we sure as hell bet it won’t be the last – where one well-dressed A-lister goes, the rest are sure to follow. Keep your eyes peeled for the red carpets, we reckon we’ll be seeing more from Gucci Couture in the coming months.