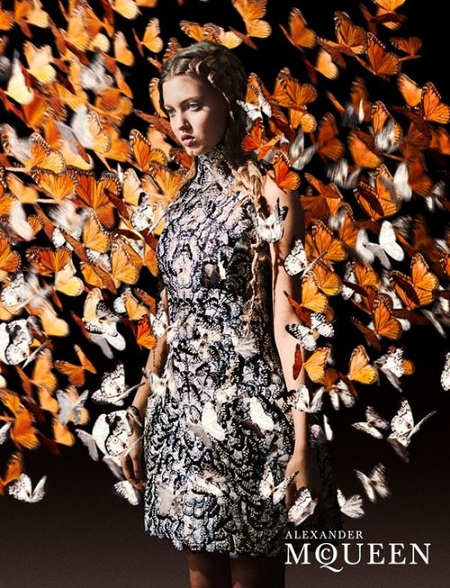 Ever since Sarah Burton rose to the near-impossible challenge of helming McQueen, we’ve been waiting to see who she’d pick to star in the label’s first campaign without Alexander (you’ll remember they skipped ads for her debut solo collection) – and now the news is out: Lindsey Wixson‘s the new face of McQueen for SS11.

That’s the same Lindsey Wixson who’s currently starring in Mulberry’s SS11 campaign, following a string of others for Miu Miu and Versace in previous seasons, and a runway stint at McQueen’s spring/summer 2011 show. Oh, and she’s 16, by the way.

Looking angelic in a white and black printed dress with scalloped edges, her hair sweetly woven into a sleek side plait, the shot of Lindsey standing in front of a flurry of orange and occasional white butterflies is beautifully melancholic – and according to Vogue UK, it’ll be appearing in store, on billboards and online very soon.

It’s a big scoop for the young American model of the moment who, after facing controversy for appearing too thin in her debut Miu Miu ads, seems to have entered her modelling stride.

We can’t wait to see the new collection.