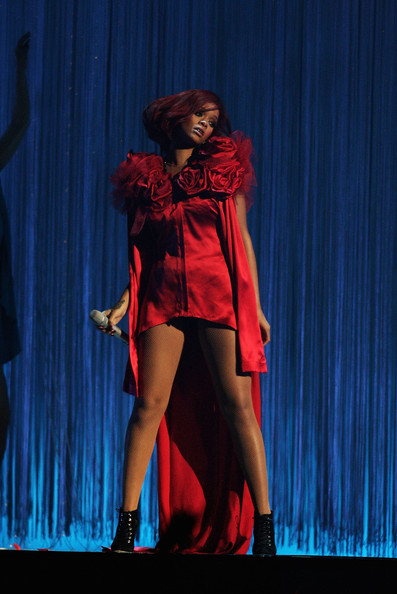 When big events such as the Brit Awards roll around, stars want to look their best. And instead of wearing any old dress, pop sensation Rihanna asked Giles Deacon to specially design her stage outfit – and of course, Giles accepted.

Naturally, Rihanna had some specific instructions behind the design – the red ruffled dress needed to be easily removed whilst performing her raunchy new single S&M, in order to reveal her lace bodice underneath with fuss-free fashion.

“I was approached by Rihanna about the project a couple of weeks ago,” says Giles. “I’ve worked with a number of great artists but not Rihanna and was delighted to do so.”

Scooping Best International Female Solo Artist on Tuesday night, the Bajan beauty pulled off her outfit change with ease, giving a show stopping melody performance at the 02 Arena in London, but Giles explains how he couldn’t enjoy the fruits of his labour.

“The main fitting was on Monday night after she had flown in from the Grammy’s but I was in Italy seeing the final pieces at the factory for next week’s autumn/winter show so could not attend unfortunately,” the designer tells Vogue UK. “My team are well versed to dealing with artists of Rihanna’s calibre though.”

We reckon Rihanna looked stunning on the night, but does she get Giles’ seal of sartorial approval?

“I think she looks great,” he says. “She plays with characters in the way she dresses – in a very good way. We often play her music in the studio, she’s great to put on at wine time.”