This year’s British Designers Collective at Bicester Village officially opens its doors to the public today – and with 21 of London’s coolest up-coming design talents showcasing their collections at up to 60% off, it’s well worth a visit.

We popped along to the press launch yesterday morning to see a sneak peek of what to expect from the British Fashion Council’s second BDC pop-up store, browse the rails and, of course, catch up with Thandie Newton, our host.

With the likes of Jonathan Saunders, Holly Fulton, Markus Lupfer, Felder Felder, Marios Schwab and Osman, among others, taking part in this year’s British Designers Collective showcasing previous seasons’ collections at an affordable price tag, Bicester Village is a must-shop for fashion fans looking to buy into easy everyday luxury.

“I am delighted to be working with Bicester Village supporting young British Designers,” said Thandie Newton, who officially opened the boutique yesterday. “The British Designers Collective is such an innovative way of giving new talent such an important ‘window’.” 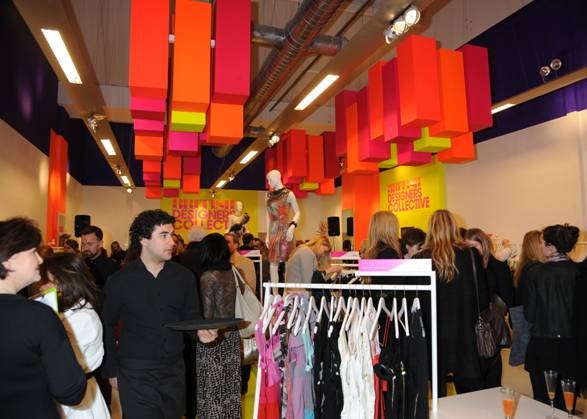 And that window is especially inviting, let us tell you.

The British Designers Collective is open for six weeks from today until mid-May in an unmistakable neon-bright boutique, complete with a matching hot pink phone box, at Bicester Village. Mark it in your diary as a must-visit this spring.