Before you say it, yes, another Kate is engaged! Muse front man Matt Bellamy has proposed to American actress Kate Hudson, which she announced on US TV programme the Today Show yesterday, sporting a brand new $300,000 engagement diamond ring (pictured below)!

The host of the US TV show, Matt Lauer, spotted the ring on Kate’s finger during the interview and instantly quizzed her on the matter in hand.

“This is new, I’m engaged, it just happened a week ago. I’m so glad you noticed,” said Kate to the host. “I haven’t really announced it, the announcing thing feels so silly.”

The mum-to-be was previously married to Black Crowes singer Chris Robinson from 2000 until 2007, and has a seven-year-old son Ryder from the marriage, reports Elle UK.

But after announcing the arrival of her second child with Matt back in January, it seems Kate couldn’t be happier starting a new life with such “a beautiful man”.

We wish you all the best, Kate. Now, when’s the date? 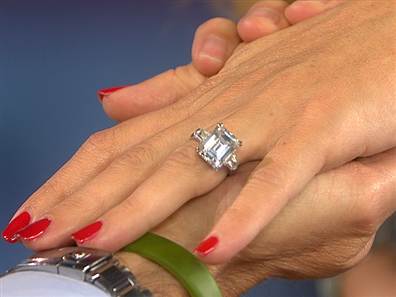 Karl Lagerfeld thinks Riccardo Tisci should take over at Dior

Update: what everyone else will be wearing at the royal wedding