If we didn’t see that famous heavy black eyeshadow and eyeliner combo, we wouldn’t quite believe that this sophisticated young lady is Taylor Momsen. The same Taylor Momsen who was once a cute Gossip Girl actress and then morphed into an angsty teen wild child.

In our opinion, the actress-turned-singer looked almost flawless as she joined the likes of Stacy Keibler, Petra Nemcova and Bar Refaeli on the front row of Marchesa’s autumn/winter 2012 collection at New York Fashion Week.

Although we’re not loving the shoes with the outfit, we applaud Taylor for deciding to go chic and elegant in a sophisticated black Marchesa dress instead of those ripped tights and barely-there dresses/tees she loves so much. George Clooney’s current squeeze Stacy wore the longer, red version of the dress, although we have to say we prefer Taylor’s navy blue one as it’s edgier and more age appropriate.

Taylor added her own stamp on the outfit – the panda eyes – but we don t think she would look right without the heavy eye make-up. At least she’s not trying to be something or someone she’s not. And ok, we’ll say it… we kind of miss her as “little J” on Gossip Girl too! 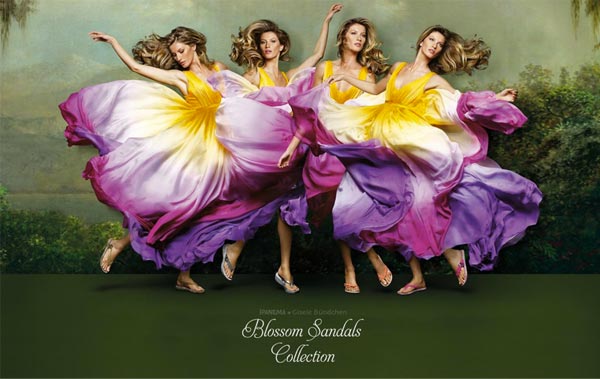 Get into the spring spirit with Gisele's Ipanema sandals campaign