To coincide with the Duke and Duchess of Cambridge’s one year wedding anniversary, Madame Tussauds has finally unveiled the Kate Middleton waxwork that cost £150,000 and over four months to complete.

The Kate Middleton waxwork that will be displayed in Madame Tussauds in London is wearing one of her most iconic dresses – the royal blue Issa dress she wore when she and Prince William announced their engagement. Madame T’s didn’t panic about the dress being sold out though, because Issa’s Daniella Helayel actually designed a replica of the blue dress just for the waxwork. Aww!

London isn’t the only place you can see Kate though, as three other waxworks have been made and will go on display in Blackpool, New York and Amsterdam. They’ll each show the Duchess wearing Jenny Packham, Alexander McQueen and Temperley London respectively.

The Kate and Wills waxworks are now on display at Madame Tussauds and stand proudly next to The Queen, The Duke of Edinburgh, The Prince of Wales, Camilla the Duchess of Cornwall, Prince Harry and the late Princess Diana.

Will you be going to see the waxworks with your own eyes? Let us know! 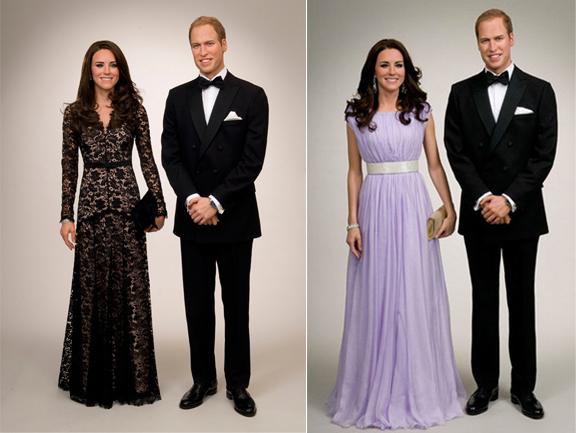 Rate or Slate: Rihanna in Givenchy, Michelle Obama in Wes Gordon and Tulisa in Topshop