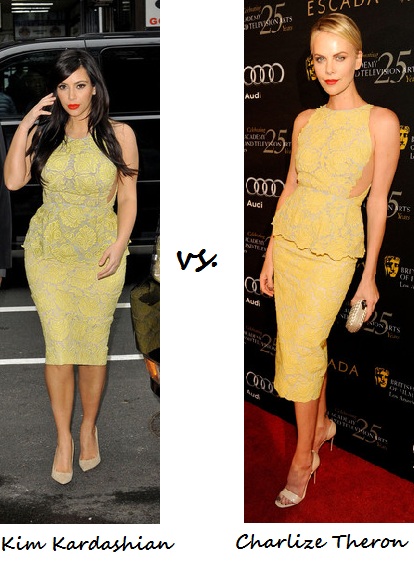 Oooh, its reality royalty meets Hollywood royalty in this week’s fash-off, as both Kim Kardashian and Charlize Theron slip into the same Stella McCartney dress!

Albeit the said starlets wore the gorgeous dress 12 months apart, the striking similarities in the styling are, well, striking!

Charlize Theron got first dibs on the stunning lace creation, featuring a peplum top and cut-out side panels, when she stepped out on the red carpet for the BAFTA Los Angeles’ 18th annual Awards Season Tea Party, last January.

Charlize dressed up her near-neutral look, accented with daffodil yellow lace, with a strong red lip, side-parted, slicked back hair and a nude Bottega Veneta Intrecciato clutch and heels to match.

But, bang on one year later and one day later (yes, really), Kanye’s beau Kim Kardashian stepped out in the same dress, accompanied by the same colour on her lips and similarly coloured heels, as she made her way to the NBC Studios for her appearance on the Today Show.

Although Kim left her glossy locks down, the dress looked very different on the two ladies, with Charlize’s near 5ft 10in, statuesque build and Kim’s curvy frame complementing the peplum trend in different ways.

So, whose look do you prefer? We’re putting Charlize as our winner on this one, because we love how the slicked back hair keeps the focus on her dress, and the burst of red on the lips stops the look from going too pale.

Kim, on the other hand, looks great, too, but we can’t help think that the hair sprawled over her shoulders, combined with an, erm, blessed bust area makes for an overly busy look, and conceals the beautiful cut-out design. Although we still don’t quite understand how the Queen of Everything waited a whole year before donning the dress! 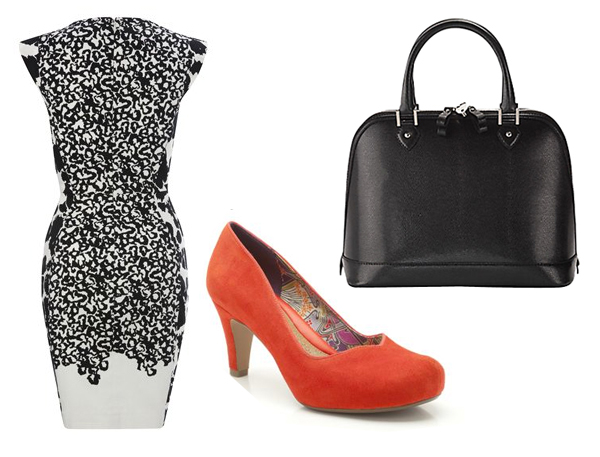 Outfit of the day plus fab exclusive discounts!