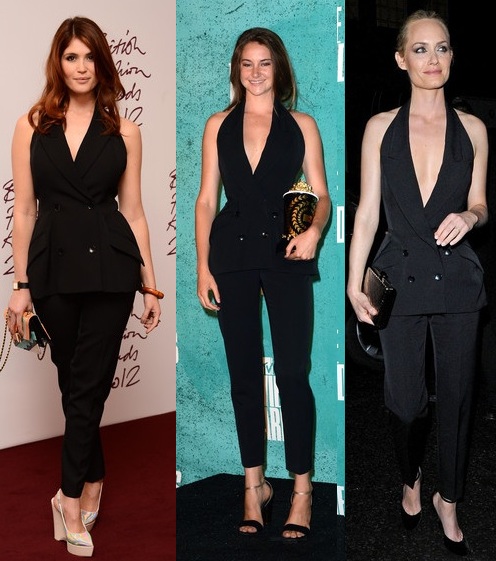 Cast your minds way back to February 2012, when Stella McCartney threw THAT lavish party during London Fashion Week (the one that included crazy, models-dancing-on-tables antics, and a very cosy looking Rihanna and Kate Moss). Attendee Amber Valletta was the first to slip into the tux jumpsuit for the event, oozing every bit the model glamour she’s carved a successful career out of. A simple black clutch and ankle strap heels accessorised the look, whilst slicked back hair and strong eyes completed the look.

And, finally in the fash-off line-up, Brit beauty Gemma Arterton wore the tux jumpsuit to the 2012 British Fashion Awards back in November. Styled with wedges by the same designer, a handheld cross-body bag and an orange bracelet, Gemma sported softly tousled waves and neutral makeup.

But whose look steals the fash-off champion title? We’re rooting for Gemma on this one for one simple reason: she oozes oodles of confidence, whereas Amber and Shailene – who look equally as amazing – seem a little vanilla in comparison. The alternative thought to styling and soft curls bring a feminine edge to the near-androgynous style of the tux jumpsuit, and Gemma gets the balance just right!