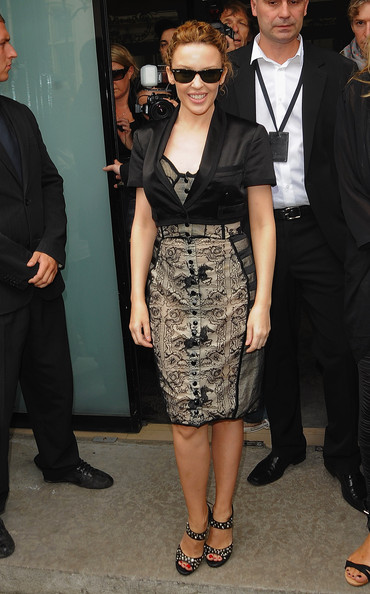 The singer – clad in a vintage black lace cone-bra dress from the designer – was in the crowd at Paris Couture Week for the golden age of Hollywood-inspired show from the man who will co-style her forthcoming North American tour.

Models were made up in the style of classic screen sirens including Joan Crawford, Marilyn Monroe, Greta Garbo and Rita Hayworth, and took to the catwalk to music punctuated by dialogue clips and film soundtracks of the era.

There were also velvet overalls, dresses made entirely out of film reel and rubber unitards. 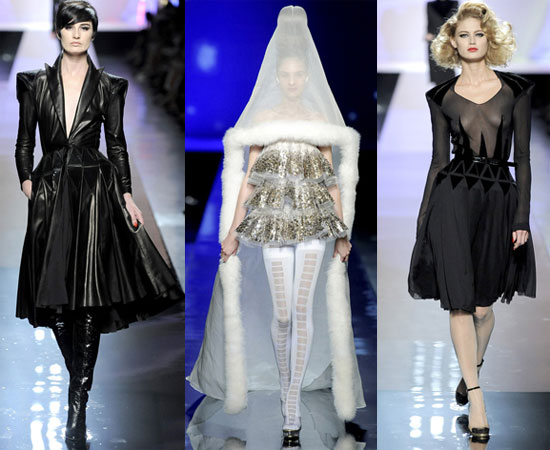 In the finale of the show – which was decorated as a film set – a bride appeared against a backdrop of famous Hollywood faces, and each one in turn was projected onto her own face.

Kylie was not the only famous face who attended – Hollywood actor Mickey Rourke also put in appearance.

Elie Saab’s collection on the final day of the shows was seemingly bridal inspired. His 46-piece show featured sequin, feather and tulle-covered dresses in varying shades of white – from purest snow colour to a shimmering gold tinge.

Valentino’s show proved a radical departure from the label’s norm, but to the surprise of guests. The usual tasteful silk cocktail dresses and day coats were shunned for skin-tight bodice dresses in flesh-coloured tulle and black lace with daringly short hemlines.