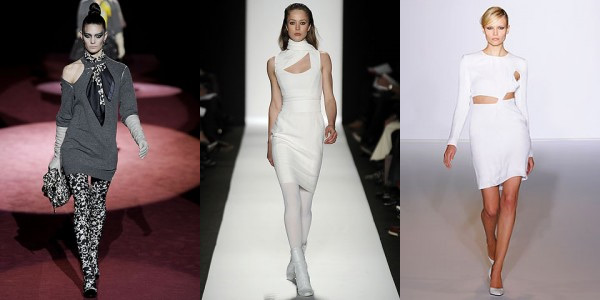 It’s time to play a demure game of peek-a-boo for the new provocative way to dress is strategically sexy: discreetly revealing, transparent but not trashy.

Without a doubt, the emerging trend for Autumn/Winter â€˜09 lies in the ability to slice away, with a surgeon’s skill, cut-out peek-a-boo holes. Design houses including Rick Owens, Sonia Rykiel, Jonathan Saunders, Narciso Rodriquez, and YSL all transformed cocktail dresses into avant-garde geometric â€˜80s throw-backs will the help of some over-eager scissors. Rodriguez and Rykiel used cut-outs to play up the sensuality of shoulder and collar bones, succeeding in a suggestive sexuality while Saunders made use of angular cut-outs to create looks that were nothing short of arresting.

The chief protagonists thus far are  British label Preen, by Justin Thornton and Thea Bregazzi, who both pushed the cut-out concept further than any of the look’s proponents so far. At Preen the mood was a little more 1960s  than 1980s with the use of electric brights and pastels. The cut-out theme was predominantly worked into more body-con dresses patch worked with stretch tulle or cobweb lace with key pieces including leather dresses with slits below the bust, at the waist, and up and down both sides, and jackets with rib-shaped holes in the back.

While some of Preen’s pieces may not, ahem, cut it in the real world they fit perfectly into the obsession with body-consciousness and the manipulation of shape that are gripping young London designers. It’s clearly time to allow your skin tone to create the patterns, but, if you aren’t quite ready for a full on game of hide and seek, go for looks with sexy mesh and lace inserts. Indeed, why not embrace cut-out offerings waiting to play peek-a-boo with you this Winter?

Behind the scenes at Rice and Beans!