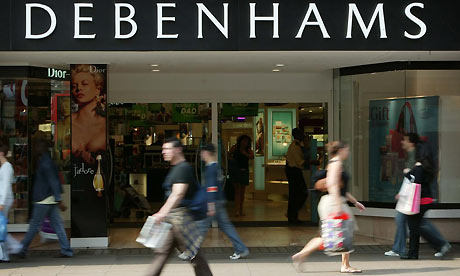 Not content with their own website, British department store Debenhams has launched online stores at Amazon and eBay, too.

The high street chain , who recently snapped up Henry Holland for its latest designer collaboration , claims to be the first department store to make the move over to the online stores in an attempt to open the door to new customers.

â€œA strong presence on the web is essential for any modern day retailer. Our use of Amazon and eBay, as well as Debenhams.com, opens the door to millions of new customers allowing them to shop from our fantastic range of products wherever they are in the UK, all from the comfort of their own home, Debenhams deputy chief executive, Michael Sharp, said.

As well as its own clothing lines, Debenhams will also sell its ‘Designers At’ range, with collections from Jasper Conran, John Rocha, Ben de Lisi, Matthew Williamson, Betty Jackson and Julien Macdonald, at Amazon.co.uk.

â€œAmazon is delighted to be working with Debenhams and its range of clothing, shoes, accessories and homewares represents a fantastic addition to Amazon.co.uk, Brian McBride, managing director at Amazon.co.uk, told Drapers.

Debenhams eBay, meanwhile, is part of eBay’s new outlet store, and the British retailer is set to sell its homewares, electricals and gift ideas on the site.