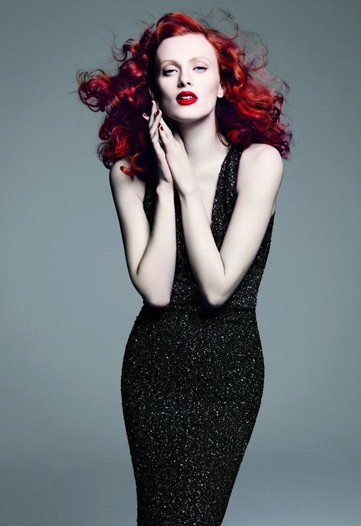 She may have fronted four seasons for the iconic knitwear label, but Angelina Jolie has been jilted by St John for ‘overshadowing’ them. Her replacement? Red-headed model Karen Elson.

Fed up with the blockbuster beauty stealing the limelight, the US brand have ousted the actress from its future campaigns, favouring instead the flame-haired British model.

It seems that much as designers are making models their first port of call over celebs (we told you we were embracing the nineties), as is St John, who wants to breathe new life into its SS10 campaign. We don’t know about life, but ever-ethereal Elson will sure breathe some fire.

Glen McMahon, CEO of St John, told WWD, â€œWe wanted to make a clean break from actresses and steer away from blondes and cleanse the palette.

The new ads, which have been shot by Greg Kadel, indeed mark a new direction for the luxury label which, in previous seasons, has shot campaigns on location, but Elson’s debut for the designer brand shows her in a bare studio.

â€œWe needed a modern point of view of St. John. We have evolved, McMahon boasts.

They might have moved on, but we can’t get past the hair.