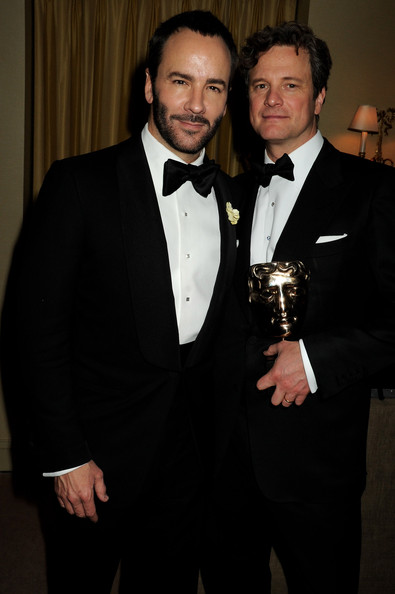 London’s cold cobbled streets may be bursting with fashionistas, but last night the capital had more than a mere Fashion Week to contend with: it was BAFTA night.

Whilst half the fash pack were hopping their way around the shows, the elite were making their way down the red carpet for the annual British film and television awards , and a few home wins were welcomed.

British hopeful Colin Firth took home his very first Best Actor award for his role in Tom Ford‘s much-hyped A Single Man, owing his win to his wife, his fridge and, of course, the designer, proving yet again the success of Ford’s first film.

“Tom Ford doesn’t know this,” Firth began his acceptance speech, “but I still have an email in my outbox that I never got around to sending him. I was writing him a note to say that really I couldn’t take on his project and explaining all sorts of reasons, but then the doorbell rang and it was a man who’d come to fix my fridge so that distracted me and the email was never sent. So my advice to you all is that you should never make any big decisions until your fridge is working properly. I have to thank Tom for making me more groomed, more fragrant, and more nominated than ever before. And Livia knows how much I owe her for this, too.”

Also doing it for the home-grown talent was Carey Mulligan, who scooped Best Actress for her part in An Education, though she wasn’t able to waffle about fridges for quite as long as Firth.

“I wish I could do a speech like Colin Firth and talk about fridges, Vogue UK report her as saying. â€œIt means everything to me. It is completely insane. I just thought there was no possible way I would win.”

There were lots of gorgeous gowns, too, but more on that later.