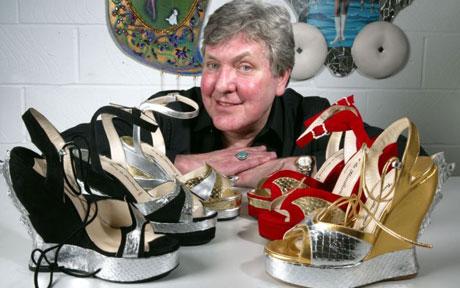 We’d be surprised if shoe designer to the stars Terry De Havilland didn’t go mad this weekend – he certainly had reason to celebrate. After all, he was given the Lifetime Achievement Award at the Drapers Footwear Awards in London last week.

And what a worthy winner, with his half a century in the shoe-making business and London fashion scene alike – and he’s mustered quite the celebrity following in his fifty years designing.

From back in the day – the 70’s, to be precise – when the likes of Bianca Jagger, Elton John and Shirley Bassey stepped into his platforms to today’s style icons including Sienna Miller, Kate Moss, Naomi Campbell and Chery Cole – everyone wants a piece of the British designer’s tiered platforms in neon snakeskin and sparkling metallics.

Good job, really, because his recently-launched ready-to-wear line is currently sending fashion fans into a frenzy.